“For too long women with fuller busts have been left with options that fall short.” 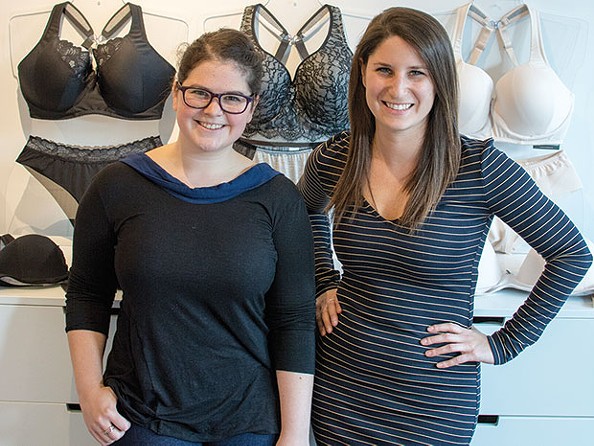 Sophia Berman can tell you what it’s like to pitch a bra that better supports large breasts to a roomful of male investors.

“I definitely think we had a different experience than if we’d been pitching a male-designed product for men,” Berman says with a chuckle. “Some [investors] invited their wives to the meetings, so they would know what we were talking about.”

After a wildly successful Kickstarter campaign last year that raised $78,000 (more than triple its goal), Trusst Lingerie is now selling its bras both online and at its newly opened storefront in Garfield. The woman-owned company set out to solve a female-specific problem and has been successful so far, despite the overwhelmingly male investment environment it dealt with.

Trusst was founded in 2014 as an AlphaLab Gear incubator company by Berman and Laura West, two industrial-design graduates of Carnegie Mellon University. They were frustrated by the lack of good, supportive offerings for larger-chested women; most brassieres are based on a torturous design from the 1900s (which was itself an improvement on the even more torturous corset). Over-the-shoulder straps and a fastener in the back don’t provide enough support for larger breasts, so Berman and West set out to build a better bra.

“After speaking with hundreds of women, and experiencing many of their concerns ourselves, we realized that underwires simply aren’t up to the task of supporting women with fuller busts,” Berman says. They wanted women to feel empowered and to give them better options when bra shopping.

“For too long, women with fuller busts have been left with options that fall short. As a company, we believe in women supporting other women,” she says.

It’s completely appropriate that the design for the Trusst bras, conceived in Pittsburgh, is based on the concept of a bridge truss. Rather than hoisting the girls up from above, Trusst’s patented design redistributes the weight of the breasts by supporting most of it from below. A truss is a triangle-shaped structure that sits under the bridge span and supports the vertical beams. It allows the weight to be distributed across a large area rather than at a single point.

The design also eliminates the need for underwire, because the support is embedded in the cups. (No more underwire poking your flesh, can I get an amen?) And not only does it give better support, the Trusst design reduces strain on the neck, shoulders and back.

It took the team two years to fully refine its bras — which the founders named after their moms — using 3-D printing, and eventually bringing on a designer.

They continue to refine and refine, adding small touches here and there, and making sure they are using the best possible materials for the sake of comfort and durability. “We definitely wanted to make sure they were machine-washable,” Berman says.

They also wanted to avoid the bras looking dowdy, like seemingly every other variety available to larger-busted women, she adds.

Most women (and anyone who wears a bra on a regular basis) completely understand the need for better bra design. But the Trusst team realized early on that part of the problem of selling the bras was to convince the rest of the population that the design solves a genuine problem. That’s how you get investors on board, after all. So they created videos of men wearing bras containing actual melons (ha), to give an idea of what it feels like to carry around that weight all day.

Berman says Trusst benefited not only from Pittsburgh’s bridge technology, but from the region’s generous entrepreneurial community as well. “Everyone helped with connections, with helping us shoot videos, when we needed to do live events,” she says. “It’s been really wonderful to have so much support.”