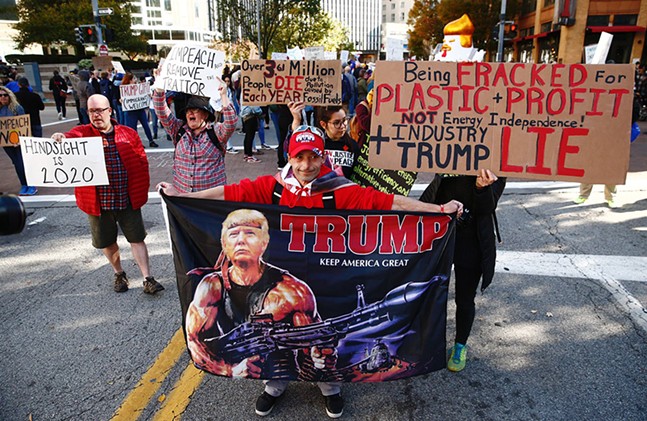 CP photo: Jared Wickerham
Supporters and protesters gathered in Downtown Pittsburgh during President Trump's visit to the David L. Lawrence Convention Center on Wed., Oct. 23.
President Donald Trump visited Pittsburgh today and gave a keynote address at the Shale Insight conference taking place at the David L. Lawrence Convention Center in Downtown. His speech was given in front of a mix of conference attendees enjoying a fancy luncheon at the front of the room, and public attendees in the back, who were there to support Trump.
click to enlarge

Trump spoke about natural-gas drilling (aka fracking) and praised some of the growth the industry has experienced in Southwestern Pennsylvania, but also spoke of the economy at large, New York pipelines, Pittsburgh sports, and U.S. Rep. Conor Lamb (D-Mt. Lebanon).

Says he never votes with him and the GOP, which is so obviously false. He has on many occasions. Here is one. https://t.co/5TOvftRvue


During the speech one protester started to yell, but the protester was eventually removed. Other than that, the event was pretty mild and lasted about one hour.

Trump lauded his decision to pull out of the Paris Climate Accords environmental agreement and repeated his now-famous line, "I was elected to serve the people of Pittsburgh, not Paris." (City of Pittsburgh voters backed Democrat Hillary Clinton by about 75 percent of the city's vote.)

Trump also said that the country's air and water are the cleanest they have been in decades. While air quality in the Pittsburgh region has improved greatly from when the region was predominantly known for steel production, the area still has some of the worst air quality in America, including the fourth highest occurrence of air-pollution related deaths of any large metro area in the U.S.
click to enlarge 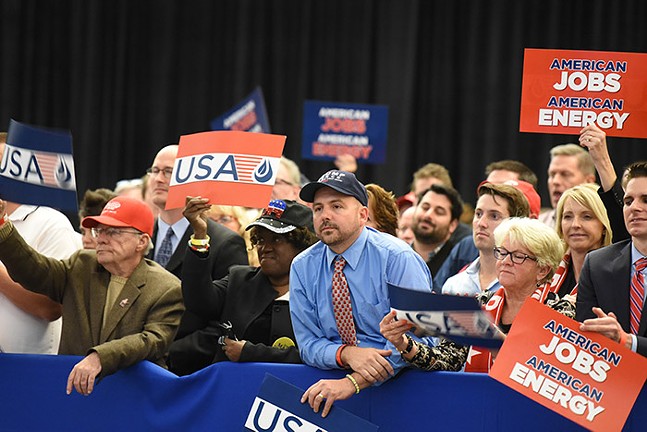 Photo: Sebastian Foltz, Butler Eagle
Supporters watch Trump speaking at the Shale Insight conference
The president also vowed to continue to support the natural gas industry and said he would support lowering regulations so it would be easier to construct gas pipelines.

Trump took some swipes at local and national Democrats and environmentalists who want to regulate, curb, or end the practice of fracking for natural gas. The speech ended with Trump shaking hands with energy workers who shared the stage with him inside the convention center.

Meanwhile, several protests occurred throughout the day in response to Trump’s visit.
click to enlarge

CP photo: Joie Knouse
Protesters marching for “Solidarity Against White Nationalism” pending President Trump’s arrival
In the morning, Jewish groups condemned Trump’s presence in Pittsburgh saying that his rhetoric around immigration and antisemitism encourage hate and violence, citing the Tree of Life mass shooting that happened at a synagogue in Squirrel Hill last year. About a dozen of them were arrested after they entered the intersection at Liberty Avenue and Commonwealth Place and locked arms.
click to enlarge 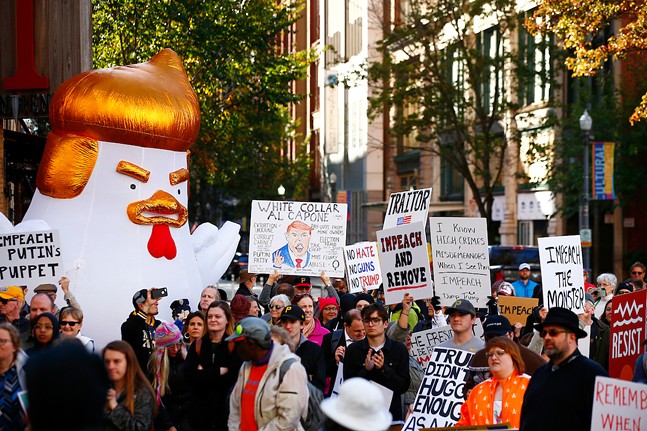 CP photo: Jared Wickerham
Protests outside of the David L. Lawrence Convention Center
Outside of the convention center, protests continued during Trump's speech.
click to enlarge 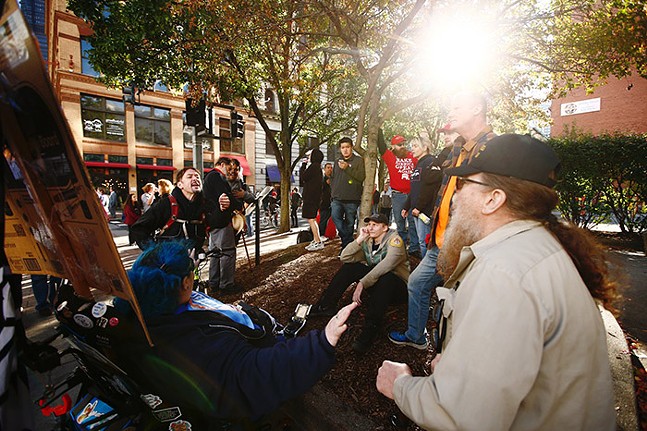 CP photo: Jared Wickerham
Trump supporters and protesters argue back and forth outside of the convention center

Pittsburgh Police have created a perimeter between protestors and Trump Supporters along 10th/Penn Ave. @PGHCityPaper pic.twitter.com/OfZLkxzhvo


Pittsburgh Mayor Bill Peduto arrived outside the convention center after the speech ended.
click to enlarge 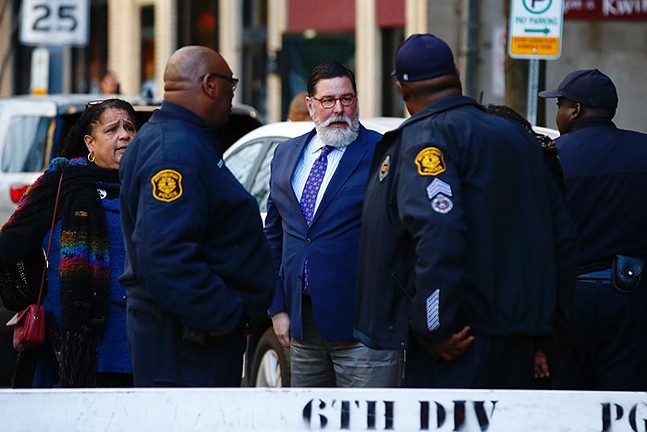 CP photo: Jared Wickerham
Pittsburgh mayor Bill Peduto speaks to police and protest organizers outside the convention center.
Peduto has had a Pinned Tweet at the top of his Twitter feed since June 1, 2017 in response to Trump first posting, "I was elected by voters of Pittsburgh, not Paris."

"As the Mayor of Pittsburgh," Peduto's post reads, "I can assure you that we will follow the guidelines of the Paris Agreement for our people, our economy & future."

CP photo: Jared Wickerham
Young protesters join in on chants of “Donald Trump has got to go.”
A final anti-fracking protest began at 10th Street and Penn Avenue, with speakers including political candidates Gerald Dickinson and Bethany Hallam, with a small crowd remaining until after 8 p.m.