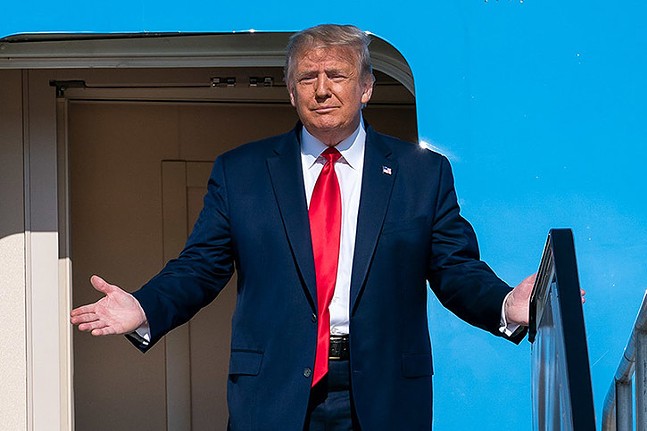 A @JohnFavere account declared on Sept. 12, “PENNSYLVANIA GOVERNOR TOM WOLF  AN YOUR STUPID WIFE .....YOUR NOT GOING TO MURDER US !!! TRUMP 2020 ... WE LOVE PENNSYLVANIA” and tagged Trump’s account, which Trump retweeted today.

Screenshot taken from Twitter
Donald Trump retweeted this on Sept. 14
The account Trump retweeted has a bio that reads “Freedom to Americans against terrorists” and an apparent reference to QAnon with a “Q” in the bio. QAnon is a baseless conspiracy theory that falsely believes elites and Democrats are running an underground child prostitution ring. Belief in this conspiracy theory has been growing over the years, and many QAnon supporters have been seen at Trump rallies. Trump has been retweeting QAnon supporters for months.

Trump’s retweet was just one part in a series of tweets aimed at Gov. Tom Wolf today. Not only did he retweet a post insulting the governor’s wife, Trump also retweeted articles reporting his own criticism of vote by mail (even though he personally votes by mail) and also retweeted articles about a U.S. Court judge’s decision ruling that some of Wolf’s coronavirus restrictions were unconstitutional.

One of those included a quote tweet of U.S. Rep. Mike Kelly (R-Butler) that said “Great News, Mike!” Kelly’s tweet said that Kelly joined the lawsuit challenging Wolf’s restrictions “because emergency declarations do not supersede our right to free association ...” Kelly is one of several members of Congress who have personally tested positive for COVID-19.

Interestingly, Trump also retweeted an account that clearly was critical of Trump. The account has a bio saying that Trump is mentally unfit to serve as president, and the post Trump retweeted read in part, “Really all you need to know. Trump judges are gangsters in black robes.”