This bioplay about the blacklisted writer combines wit, bravery and true patriotism 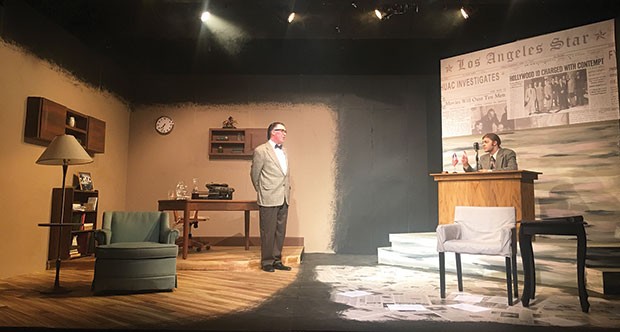 Who da thunk that the same person could have written A Roman Holiday* and Spartacus? A tender coming-of-age story of a fragile young woman and a testosterone-charged tale of an ancient slave revolt.

Even more remarkable is the glimpse of that combination of fragility and righteous rage in that writer, James Dalton Trumbo (1905-76), in the South Park Theatre production of Trumbo: Red, White and Blacklisted. His son, Christopher Trumbo (1940-2011), wrote the bioplay, first produced in 2003, based mostly on his father’s letters and public statements. But Trumbo is not about just one person, but about the hole ripped in American culture by the “blacklist” (how many people remember?) that tore apart the careers of hundreds of talented people.

Back in the days of real political “witch hunts,” the U.S. House Un-American Activities Committee fought the Cold War by attacking left-leaning artists as the Red Menace. Those “now-or-ever-been-a-member-of-the Communist-Party” witnesses who informed on their friends kept their jobs, if not their souls. Those who didn’t inform didn’t do so well. Trumbo peaks with a spine-shivering speech dissecting HUAC, on Americans and on informing and on victims, well delivered by Greg Caridi in the demanding title role. He’s well supported by Drew Campbell-Amberg as the youthful Christopher and the multi-cast Dalton (really!) Wynegar, both in Congress and in comical distress.

Given the limitations of community theater, director Christopher Josephs does a most creditable job of delivering the drama, along with biting wit of a great writer and his surprising sensitivity as a devoted husband and father. Trumbo’s wife of 38 years, Cleo, and their son and two daughters, all suffered mis-aimed abuse from the “Red Scare.” Sometimes those unjustified fears are comical; some left lasting wounds on the families.

Trumbo combines wit, bravery and true patriotism. One of the original Hollywood 10, Trumbo served time in prison for “contempt of Congress.” He agreed: “As far as I was concerned, it was a completely just verdict. I had contempt for that Congress and have had contempt for several since.”

* Ian McLellan Hunter, Trumbo’s “front,” was originally credited with writing the movie and received the Oscar in his name. 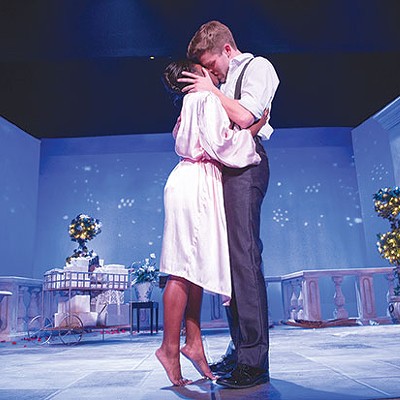