Most people will enjoy True West for how twisted familial relationships can be. 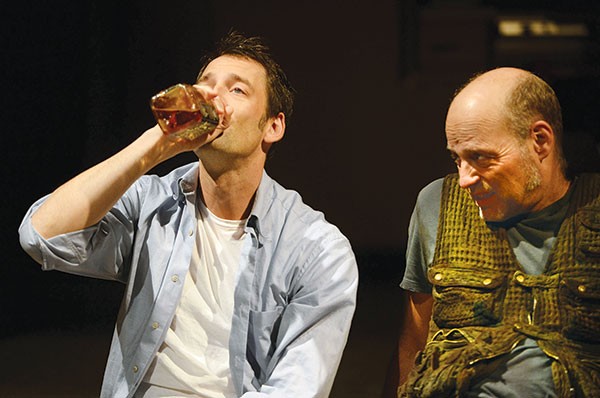 A sure sign that you're getting old is realizing that a play you saw when it was new and edgy is now a mainstream chestnut. Pittsburgh Public Theater's "Masterpiece Season" marches on with Sam Shepard's True West. Directed by Pamela Berlin, it's a lovely production with plenty of laughs and very little sting.

Oddly, the genesis of True West's success comes not from the 1980 world premiere, in San Francisco, and even less from the original Broadway version that year, which Shepard publicly deplored. No, the true True West was born in a 1982 revival by Chicago's then-little-known Steppenwolf Theatre Co., directed by company co-founder and artistic director Gary Sinise. (Yes, that dour-Republican, Lt. Dan Band, CSI: NY Gary Sinise.) That interpretation moved to New York with Sinise opposite his buddy John Malkovich, and everyone lived happily ever after.

Since there are newbies in the audience, I won't supply spoilers. The story is about two grown brothers, seemingly opposites on the socio-cultural-economic scale, changing roles and regressing not only into childhood, but into primitive man.

Berlin fills the senses with a richly physical True West on a lush mountainscape behind a cozy Southern California cottage. Thanks to fight director Randy Kovitz and the design team: Michael Schweikardt, set; Zach Moore, sound; John Lasiter, lighting; and Michael Krass, costumes. All the stage crew should be congratulated as well as production stage manager Fred Noel and assistant Kelly Wood.

Ken Barnett and David Mogentale get quite a workout as the cautious and the Cro-Magnon brothers, respectively. The former morphs neatly into his brother's drunken free spirit. The credibly threatening Mogentale tiptoes around his brother's genteel surface. Mary Rawson underplays a wonderful cameo as their mother, hinting how the brothers turned out this way. Dan Shor fulfills the jolly Hollywood producer at the heart of the fraternal strife.

Shepardistas will argue about the playwright's continuing motif of conflicted brothers and conflicted selves, the pain of identity, the loss of truth and/or the West. Most people will just enjoy True West for how twisted familial relationships can be. Think Marx Brothers, not Father Knows Best.