The Coen brothers' True Grit remake is solid, but doesn't add much of value. 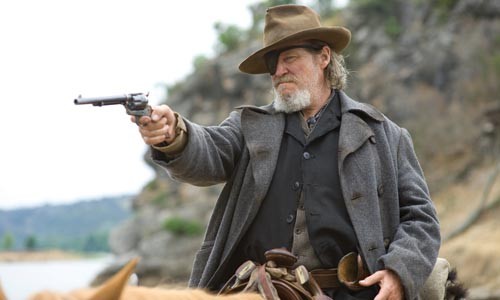 There's a fair bit of Hollywood (if not quite cinema) history tied up in Joel and Ethan Coen's True Grit, based on the 1968 Western novel by Charles Portis, which was famously filmed in 1969. John Wayne, snarling and belching, won his Oscar for playing Rooster Cogburn, that one-eyed cur of a U.S. marshal who tracks a killer into hostile Indian territory on behalf of a 14-year-old girl, who accompanies him on his perilous odyssey. It was a role unlike anything else in Wayne's oeuvre, and it proved that even great stars can become great actors once in a lifetime.

Portis wrote True Grit in the breathless tone of a dime novel, and the original film is remarkably faithful, capturing well the book's wry wit and flashes of ruthless violence. Sounds like a Coen Brothers movie to me. But there are many shades of wry and many degrees of ruthless, especially since the 1970s, as the brothers demonstrate in their retelling.

The story begins when Mattie Ross (newcomer Hailee Steinfeld) travels from her family farm in Arkansas to collect her dead father's body in a town about 70 miles away. He'd been killed by Tom Chaney (Josh Brolin), a wanderer whom her father had tried to help by giving him a job. Mattie is a loquacious lass with lots of spunk, but she's also rather irritating and persistent, and she wants revenge.

And so, after some persuasion, Rooster (a gravelly-voiced Jeff Bridges) agrees to track down her father's killer. They're joined by La Boeuf (Matt Damon), a capable, if somewhat precious, Texas Ranger who's tracking Chaney for the murder of a state senator. Soon they're pursuing "Lucky" Ned Pepper (Barry Pepper), a notorious outlaw whose gang Chaney has joined.

The novel True Grit is told in first person by Mattie, looking back from middle age, yet still able to sound like a child. (Portis doesn't let on whether this is by her own writerly intent, or because she's capable only of such urgent prose.) Neither film quite captures her exclamatory voice, but the first film comes closer because the Coens don't do 14.

In fact, the Coens only really do the Coens. In their best films, like Blood Simple and O Brother! Where Art Thou?, they're in the pantheon of American cinema. But too often they tend to range from glib to smug, and they've always been especially hard on hicks and crackers.

True Grit falls somewhere in the middle. It's a visually gorgeous work, and Roger Deakins, their exquisite cinematographer, paints the barren sun-soaked American West with a gloomy iconography. The set decoration and makeup, right down to the rotting teeth, are transporting. The violence is swift, graphic and difficult to watch. The performances are absorbing, especially Pepper as "Lucky" Ned, a role originated by Robert Duvall, whom Pepper gracefully imitates.

But this True Grit takes liberties. The Coens change the way some things happen while more or less ending up in the same place -- almost as if they're trying to hold the attention of people who know the story too well. If they intend here to send up Western mythology, they've done it so subtly that you'll need Cliffs Notes to discern it. This is the most Western Western we've seen in years, not naïve about how the genre has changed, but not too willing to subvert it much further (apart from two brief moments of overt racism against native Americans). An ethereal climactic ride on horseback glistens with moonlight, starlight and a gentle snowfall, until the riders, one near death, see a light in the window of a cabin.

The Coens jettison two supporting characters from the novel who provided some comic relief in the earlier film: Rooster's sweetly cantankerous Chinese friend Chen Lee appears briefly, and the formidable lawyer J. Noble Daggett, whom Mattie wields like an atomic weapon, surfaces only in a voiceover (by J.K. Simmons). Nor do we get to meet Gen. Sterling Price, Rooster's orange tabby. These are regrettable omissions, replaced by nothing as good. Why the Coens felt the need to re-film Portis' novel is something you'd need to ask them. But they did it, and they did it well, if un-abidingly. Not that it matters anyway.