Eddie Korbich attacks the role with a showman’s flair 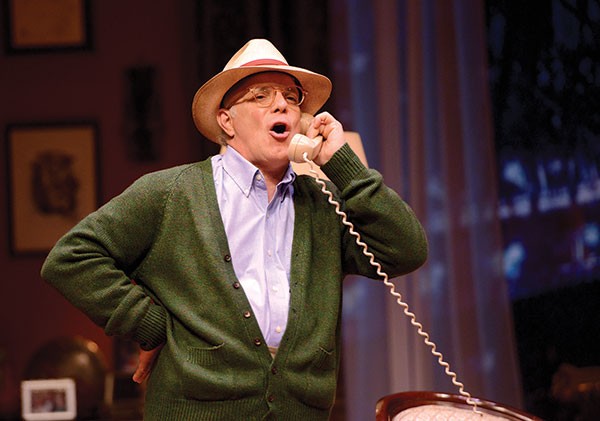 For reasons not made entirely clear, the Pittsburgh Public Theater has exhumed Jay Presson Allen’s 1989 one-man show Tru, based on the work and words of Truman Capote — who was, at one time, the most famous writer in America.

After several noteworthy successes, Capote shot to stratospheric heights with the 1966 publication of his “nonfiction novel” In Cold Blood. Also in 1966, Capote hosted the Black and White Ball at New York City’s Plaza, since recognized as the most significant social event of the 1960s.

Then began his slide into a sad, if utterly predictable, waste of alcohol, drugs and betrayed-friends-turned-enemies.

Allen’s play takes place over two nights in 1975. That year Capote published in Esquire a few chapters from an unfinished novel in which he, roman á clef style, revealed intimate secrets of the society dames he counted as close friends. Afterward, well-polished doors were slammed in his face all over Manhattan (and the world). The two acts of Tru find Capote defending his actions to himself and us.

Since Act I is the same as Act II, there’s not much here in the way of drama. Allen’s script is just Capote recounting a bunch of anecdotes. He knew everyone (or at least said he did), and Allen never strays too far from dirt-dishing.

But I’m not sure Allen was actually trying to write a play. Tru was created as a star vehicle for Broadway veteran Robert Morse, who won a boatload of awards for his performance … while Allen came up empty-handed.

The Public Theater has the good fortune to find another New York theatrical veteran, Eddie Korbich, to play the part. Under the tight direction of Ted Pappas, Korbich attacks the role with a showman’s flair, and there isn’t a second that he doesn’t enchant.

Of course “enchant” wasn’t a word often associated with Capote’s personality. Allen’s version is notable for its lack of the man’s documented vile unpleasantness. Her Capote is more of a middle-aged drunk Peter Pan.

But while I have my doubts about the play itself, there’s no question that Korbich and Pappas have given it as entertaining a life as you’re likely to find.