"You wouldn't feel that great if you were doing this to catch a buzz." 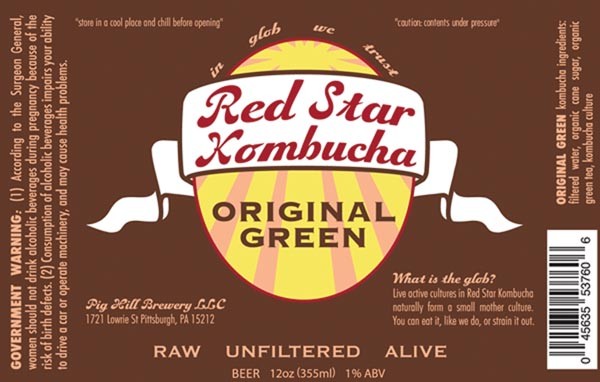 The label for Original Green Kombucha

"Technically," acknowledges Naomi Auth, "we are [making] a beer." But Auth, the owner of Pig Hill Brewery, does mean technically: Her Troy Hill space lacks malted barley, hops or steel fermentation tanks. That's because Auth is making kombucha, a fermented-tea drink that originated in China more than 2,000 years ago.

This punchy, effervescent brew is green tea, fermented by a complex web of bacteria and yeast living in a symbiotic, jellyfish-like mat. It's not pretty to look at, but the results sure taste good.

The fermentation results in a slightly alcoholic beverage — about 1 percent alcohol by volume. And since federal law classifies any beverage containing over 0.5 percent alcohol as liquor, Auth's brewery is under the control of the PLCB. (Some mass-produced kombucha recipes are reformatted to contain less alcohol, but Auth prefers the flavor of the traditionally fermented beverage.)

Although Red Star is produced in a newly licensed Pennsylvania "brewery," don't expect kombucha to become a party drink. "You wouldn't feel that great if you were doing this to catch a buzz," Auth says. "You'd have to drink five — and digest them — in the time it would take you to drink one can of Budweiser."

Instead, think of kombucha as a healthy alternative beverage. "It has lower sugar than soda, and is more exciting than water," Auth says, adding that the probiotic-packed beverage is the perfect drink for someone who chooses not to imbibe at a party.

There are several ways to try Red Star Kombucha: The brewery is open to the public on Saturdays between noon and 6 p.m.; cases and four-packs are available at several area beer distributors; and a number of local bars serve Red Star. (The list is expanding, so check Red Star's website.)

And as for that glob of bacteria and yeast you may find in your bottle? Don't freak out. "It's totally natural and won't hurt you,' says Auth. "But if it scares you, you can flick it out with a straw."