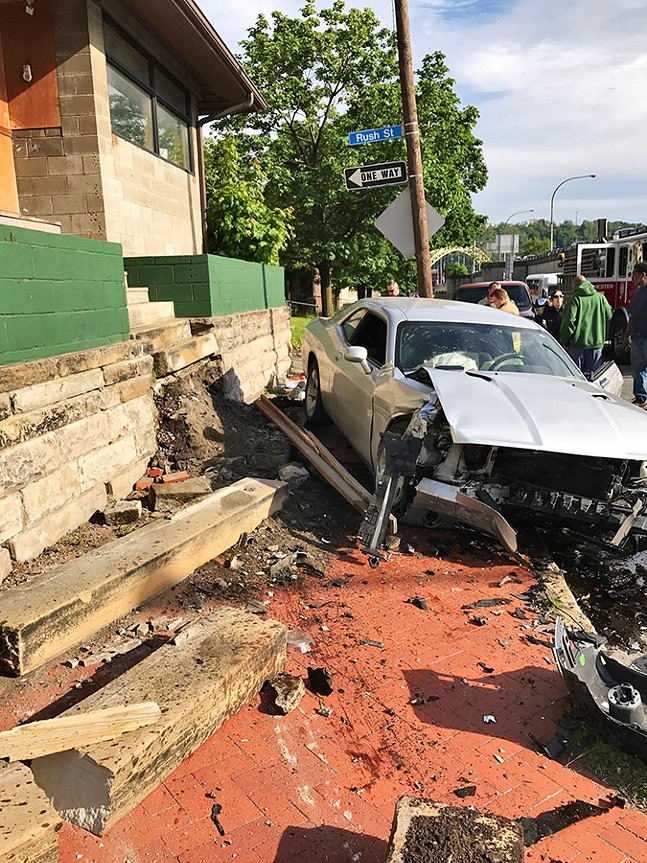 Photo: Courtesy of Renee Rosensteel
Car crashing into a home on Chateau Street in Manchester in 2017
Since 2018, the intersection connecting the neighborhoods of Manchester to Chateau in the North Side has seen three pedestrians struck by vehicles, and two of them were killed. In 2017, a vehicle crashed into a home directly across the street from the intersection.

Nick Ross of advocacy group Walk/Ride Northside says Chateau Street in Manchester and Beaver Street in Chateau have been problem streets for decades, and the intersection that connects them is especially dangerous for all road users.

Both Chateau and Beaver streets run parallel to Highway 65, which is raised above the neighborhoods on a large ramp. Both streets each have three one-way lanes, and Ross says drivers typically speed up to 65 mph or faster.

“I have heard people have videos of people drag racing on Chateau Street in that area,” says Ross. “It was built in a time when people didn't consider the impacts of its design.”

He says the road's design encourages dangerous driving and makes it extremely dangerous for pedestrians looking to cross the street, even at bus stops. Last week, a pedestrian was struck and killed on Chateau Street near the intersection that runs underneath Highway 65.

Now, Pittsburgh officials are indicating that the intersection and at least parts of Chateau Street are getting a redesign to improve pedestrian safety.

Karina Ricks, Pittsburgh’s Department of Mobility and Infrastructure (DOMI) director, wrote in an email to Pittsburgh City Paper that the city will “reduce and narrow the lanes to slow traffic, shorten pedestrian crossings, and improve overall safety,” on Chateau Street.

Tim McNulty, spokesperson for Pittsburgh Mayor Bill Peduto, says that DOMI has been in discussion with Manchester residents for some time about safety improvements for the corridor and that planned improvements are set for when construction season starts in the spring. He didn’t provide full details, but he says the redesign will be largely focused on reducing the number of lanes, improving lighting, and installing a flashing street-crossing sign.

McNulty says the plan is for DOMI to give an update on the project to the neighborhood at the upcoming Manchester Citizens Corporation meeting at 6 p.m. on Wed., Jan. 29.

Photo: Courtesy of Renee Rosensteel
Fatal crash on Chateau Street on Jan. 24
Ross is happy the intersection is getting a redesign and says it is something that advocates and community groups have wanted for a long time.

“I started to volunteer about seven years ago, and Chateau/Beaver was one of our biggest priorities, even back then,” says Ross. “There is no reason that there should be three lanes in one direction. For a mile, there is only one chance to cross the street.”

Ross says changing the design of these streets and the intersection that connects them is necessary for the North Side. He mentions that reducing a lane will greatly improve safety because Chateau currently has two through lanes traveling past the intersection, which encourages drivers to maintain high speeds even as they drive pass bus stops and pedestrian crossings between Columbus Avenue and Franklin Street. Ross says this intersection is the only place for pedestrians and cyclists to travel between Manchester and Chateau. It's also the only direct route to the Three Rivers Heritage Trail along the Ohio River.


Our hearts are heavy this morning with news of another senseless death on our streets.

Elected officials have known this area is dangerous for years and nothing has been done.

“That is how you get to the trail to the riverfront,” says Ross. “If you can’t safely get to the trail without a car, then it is not accessible for you. Something needs to be done to slow cars and encourage them to yield better.”

Ross explains by eliminating the right-hand lane on Chateau Street, and converting it into street parking, planters, or a bike lane, there could be transformational improvements to road safety in the corridor. He says that if the city extends the curb out into the lane at the intersection, it will make it easier for pedestrians to cross the street. (The third lane on the left side of Chateau ends at the intersection and vehicles are redirected onto Beaver Street.)

Additionally, he says reducing the number of lanes means that when buses stop to drop off or pick up passengers, then drivers can’t zoom by because that lane would be eliminated. Last year, a pedestrian was struck by a car after they exited the bus and attempted to cross Chateau Street.

“It needs to be slowed down and reduced to a single lane,” says Ross. “There is no reason for two through lanes.”