Trouble With the Curve

It's a dull, sluggish movie even for Eastwood 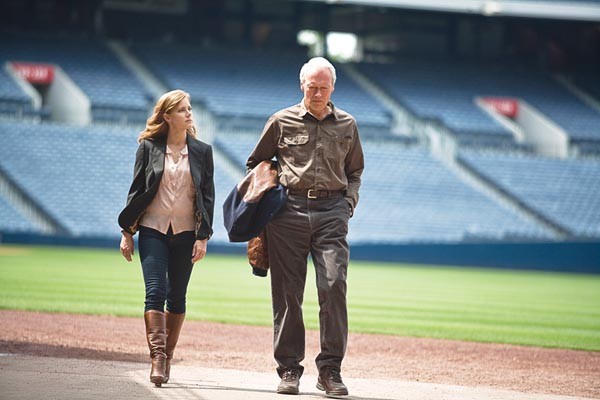 Trouble With the Curve is the kind of dishonest, sentimental fairy tale you'd expect from a man who talks to empty chairs. It stars Clint Eastwood as Gus, an enervated major-league baseball scout who's losing his eyesight and who's fully aware of his decline — which mysteriously gets all better when he needs to use his fists (or, in similar movies, a gun).

Eastwood has played this kind of character in many movies he's directed, but here that favor (literally) goes to his long-time assistant director Robert Lorenz, helming for the first time, with a script by Randy Brown, another neophyte. It's a dull, sluggish movie even for Eastwood — one long series of Hallmark moments, minus the commercials — and it has as much edge as a baseball.

A listless Amy Adams plays Gus' semi-estranged lawyer-daughter, who goes with him to scout a pudgy young power hitter, and Justin Timberlake is a charming rival scout who romances her. The story — which would fail a college fiction-writing class — has the kind of contrived resolutions you'd expect to follow such contrived conflicts. A banal entertainment, it has nothing to say, and neither does its star, who should just stop talking.