Triggers is smokin' on Smoke Show

With its new full-length, Smoke Show, local band Triggers has more than made good on the promise of its 2007 debut EP, Elude the Suits. Traces of that EP carry through in reworked versions of "Body English," "Change It Up," and that staple of the band's live show, the rave-up "She Had Me at Takeoff," closing the new CD with an pleasantly surprising horn vamp.

Also transmitted intact are the band's nods to the classic pop of Cheap Trick, The Cars, Nick Lowe and Elvis Costello, and its insistence on catchy hooks and rhythms that give this foot-tapper of an album a consistently nervy, twitching groove.

Songs like "Contagious," "How Do I Get to the Roof?" and "Easy Cleanup" find Triggers adopting a more aggressive, strutting garage style reminiscent of latter-day Von Bondies or perhaps The Killers, with minor-key riffs lightened by funky chromaticism. The rhythm section of Rich Kawood (drums) and Joe Kasler (bass) packs a hefty wallop, a strong underpinning for the polished, clipped vocals of keyboardist Brett Zoric and guitarist Adam Rousseau.

Part of Triggers' newfound ballsiness is just better recording. While the band tracked at Mr. Small's and Machine Age -- resources available to most local bands -- it was joined by experienced ears. Smoke Show was produced and engineered by John Hiler (whose credits include work with Liz Phair, Stephen Stills and Duncan Sheik) and mixed by him at The Spacebar, in Los Angeles.

If I have a bone to pick with this batch of songs, it's that Triggers has almost too many good ideas -- what a tragedy! But when they're shoehorned into these largely three-minute pop songs, it can give the constantly shifting music a frantic edge. Perhaps that's why one of my favorites is the relatively simple "Hotel Parry," a two-minute Big Star-style tune that spends nearly half the time slowly rising in volume, before breaking into a hiccupping yet anthemic chorus.

Overall though, Smoke Show is easily one of the strongest and most assured local releases so far this year. Like we expected anything less. 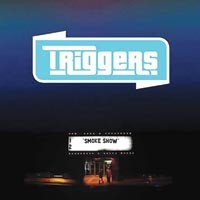