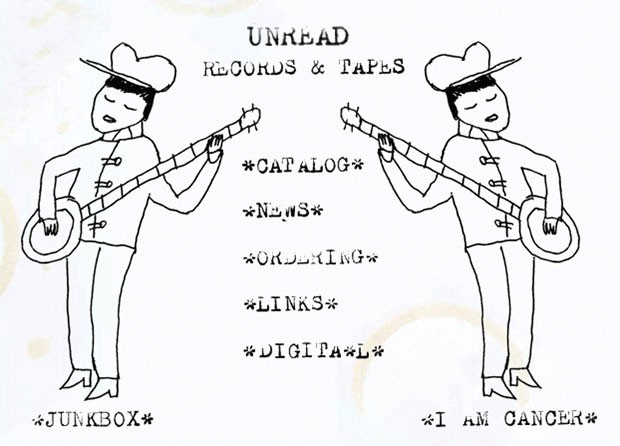 Original art on the Unread Records website by label founder Chris Fischer
For a guy who was well versed in obscure music, Dave Vucenich never used that knowledge to show superiority. He was more concerned with sharing the music, either as a rock-solid bassist, a record-store employee who organized the 45s inventory, or a friend who made cassette compilations of ’60s garage rock.

“He would number my tapes,” says Max Terasauro. “I think I was up to 47. Think about that — 47 tapes! Those singles are only two or three minutes long!”

Vucenich died in his sleep on Feb. 5 of an apparent heart attack. He was 50. Best known perhaps as the bassist of locals Mt. McKinleys, he also played in several other bands, including the Cynics and, recently, the Shapes of Things. Terasauro, who was in the latter band, and Eric Vermillion (of the Full Counts) are organizing a public tribute to Vucenich at 9:30 p.m. Fri., March 10, at Gooski’s (3117 Brereton St., Polish Hill).

The Mt. McKinleys will perform (as a duo), and DJs Tera Dactyl, Maxx and Gregg Kostelich will spin records. The organizers plan to auction Vucenich’s Hofner bass guitar and give away “Dave V” grab bags, which will include copies of his beloved tape compilations. Proceeds from the auction and the $5 cover charge will go to Vucenich’s family. “He was such a nice dude,” Vermillion recalls. “That’s why he was always in the center of everything when it came to music.”

At 7 p.m. Sat., March 11, Distro’s (4614 Liberty Ave., Bloomfield) will host a festival honoring the Unread Records imprint. Chris Fischer started the vinyl and tape label nearly two decades ago as a teenager in Lancaster, Pa. Despite having moved around the country, Fischer (now a Pittsburgh resident) continues to release music, which runs the gamut from singer-songwriters to noise. When some Unread acts discovered the 200th release was imminent, they assembled a three-cassette compilation tribute and talked about staging a festival. Fourteen acts, 10 from as far away as Portland, Ore., perform on Saturday. Will Simmons, guitarist of the Upholsterers, says the evening “is going to be lots of bite-sized chunks of things,” with everyone playing brief sets. The bill includes his band and local performers GG, C. Frank and Swampwalk.