There are about four plays going on inside, and if one doesn't hold your interest, another will 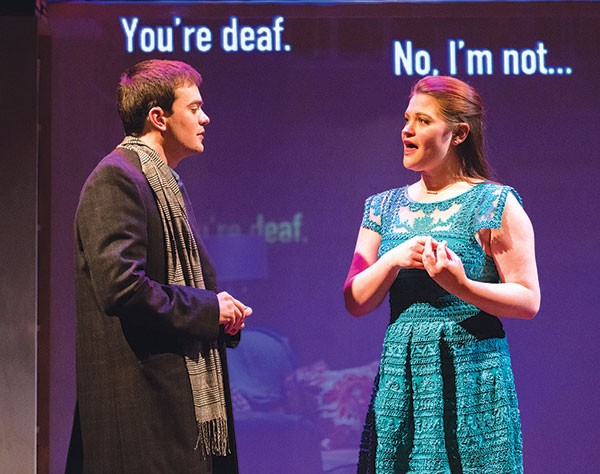 Whatever you can say about City Theatre's production of Nina Raine's Tribes, you can't complain you don't get your money's worth. There are about four plays going on inside, sometimes consecutively, sometimes concurrently, and if one of them doesn't hold your interest, another will.

Raine opens with what turns out to be her least-developed thread — the life of a royally screwed-up British family. Beth and Christopher are parents to Daniel, Ruth and Billy. Everyone is an emotional nightmare and, with the exception of Billy, extravagant in their misery. John Judd and Laurie Klatscher, as Mom and Pop, with Alex Hoeffler and Robin Abramson as Daniel and Ruth, give almost volcanic performances and, under the aggressive direction of Stuart Carden, play full-out.

But don't spend too much time there, because Raine's attention centers on Billy, a recent university grad who is also deaf from birth. Billy's journey takes him into the deaf community (a group his family has always kept him from). Tad Cooley gives a quite moving performance as a young man slowly stepping out in the world after having been coddled for so long.

And then Raine finally gets to her real story, when Billy meets Sylvia, a young woman born to deaf parents and now going deaf herself. Sylvia straddles both the hearing and non-hearing worlds, and Amanda Kearns makes Sylvia's conflicts and struggles immediate and powerful.

We go back to the family drama for a bit, then more with Billy and how he's navigating his way in the deaf community — which Sylvia is leaving as, paradoxically, her hearing loss becomes more profound.

And just because there are a few minutes to spare, out of nowhere Raine introduces another big, messy plot element (that's probably a surprise, so I won't reveal it).

If the play sounds schizophrenic, it's probably appropriate that this review does as well. Because even though I was fully aware of the clichés, non sequiturs, extraneous characters and overripe and/or unnecessary plot points, I was intrigued by Raine's writing throughout and fascinated by much of what she was saying. Tribes is a mess, but a very compelling one.