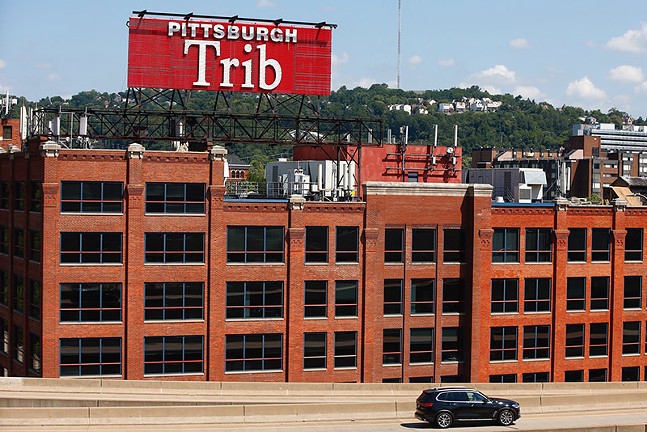 CP photo: Jared Wickerham
The Pittsburgh Trib sign on the North Side
In 2016, the Pittsburgh Tribune-Review ceased all printing in the city of Pittsburgh and many had assumed the start of a serious decline for Pittsburgh’s second biggest newspaper. For decades prior, thanks to the wealth of Richard Mellon Scaife, the paper had been a true competitor to the Pittsburgh Post-Gazette and its columns and investigations were legendary in right-wing circles.

That year, with its staff moving out of its offices in the Clark Building on the North Side, and with the ever-present aura of a slowly dying news industry, the outlook for the Trib was not good.

But over the last several months, TribLive, the company's website, has been making a series of moves indicating it’s on the rise, like hiring talented reporters and increasing city-centric news coverage. And today, Trib Total Media takes another step up in announcing its new investigative-news partnership with Spotlight PA.

“Joining Spotlight PA strengthens our commitment to serving readers throughout Southwestern Pennsylvania,” said Trib Total Media President and CEO Jennifer Bertetto in a posting announcing the partnership. “Decisions made in Harrisburg affect every aspect of our lives here. We know that readers are hungry to know what goes on in the capital. Joining forces with the professionals at Spotlight helps us fulfill our mission to be a complete news source for the region.”

Spotlight PA is a nonprofit news organization focused on investigations of statewide government and large institutions. It was launched in September 2019 through The Philadelphia Inquirer and the Lenfest Institute for Journalism, and the Trib joins them and PennLive in partnering with Spotlight PA.

As part of the partnership, Trib reporter Jamie Martines will become a full-time staffer for Spotlight PA based in Harrisburg. According to a letter from Spotlight PA’s Editor-in-Chief Christoper Baxter, Martines will focus on elevating the concerns of those in Western Pennsylvania throughout Spotlight PA’s coverage.

“The future of our state depends on Pittsburgh’s revival and the success of the rest of Western Pennsylvania,” wrote Baxter in a letter. “Likewise, the future of the region rests, in part, on those in power in Harrisburg setting the agenda. And yet, despite that interdependence, Pittsburgh receives less news and information from Harrisburg than ever.”

Spotlight PA, even before this announcement, has already made a splash in Western Pennsylvania, with a recent investigation into UPMC that showed its claims of the Pittsburgh region having a less-deadly coronavirus strain were not backed up by scientific research. Spotlight PA also recently joined the Pittsburgh Media Partnership, which Pittsburgh City Paper also belongs to.

Trib’s new partnership comes as Spotlight PA severed ties with its original Western Pennsylvania partner, the Pittsburgh Post-Gazette. According to Baxter, Post-Gazette management approached the nonprofit about removing its reporter and exiting the Spotlight PA collaboration. The relationship ended on July 17.

While the Post-Gazette has been experiencing chaos and its union is on the verge of a strike, the Trib has been quietly raking up some impressive wins. The company recently hired award-winning reporter Paula Reed Ward, who took a buyout from the Post-Gazette last month. Veteran editor John Allison also joined the team last year, as did Paul Guggenheimer who used to work at WESA.

On top of that, the Trib partially moved back into the Clark Building in October 2019. What has followed has been a resurgence of Pittsburgh city coverage, all while maintaining its presence and print newspaper in the suburbs. The Tribune-Review still prints daily newspapers for its audience in Westmoreland County and Alle-Kiski Valley markets.

“This move to offices on the North Shore illustrates our unwavering commitment to providing timely, comprehensive coverage to our Allegheny County audience,” said Bertetto in a 2019 press release. “There is a hunger for great Pittsburgh-area news and we will be there to deliver it.”

And even though the Trib has not resumed printing papers in Pittsburgh city limits, some businesses in the city have been independently purchasing stacks of the suburban print Tribune-Reviews to sell to customers. For-sale copies have been seen at the North Side Giant Eagle, the Shursave in Bloomfield, and other locations.

With several recent moves now culminated by a new partnership with Spotlight PA, it appears the Trib is staging a comeback.