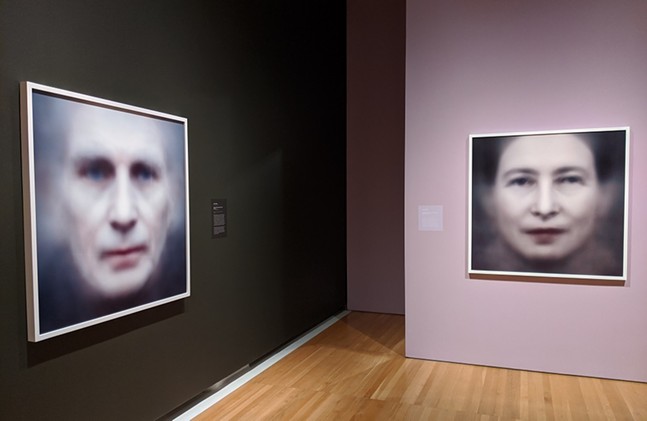 CP photo: Amanda Waltz
(Even the Dead Are Not Safe) Eigenface prints of Samuel Beckett (left) and Simone de Beauvoir (right) at CMOA's Trevor Paglen: Opposing Geometries exhibit
You can’t avoid artist Trevor Paglen’s work at the Carnegie Museum of Art. His CLOUD #902 Scale Invariant Feature Transform; Watershed is right there, wallpapered across the museum’s Scaife Lobby. What looks like a serene, innocuous scene of clouds, however, hides a commentary on advancing technology’s impact on humanity and the environment.

A closer look at CLOUD #902  – part of Paglen's Opposing Geometries solo exhibition now open at CMOA through March 14, 2021 – reveals perfect circles, lines, and other shapes produced by running the image through an algorithm trained to “identify geometric anomalies in scientific photographs,” according to the museum’s description. To the machine, the cloud is imperfect, a thing to be scrutinized and marked.

What’s more, the use of literal clouds points to the figurative cloud, in which all of our digital photos, documents, and other content are stored. But as explained by Dan Leers, curator of photography at CMOA, who organized the Opposing Geometries as part of the Hillman Photography Initiative with project curatorial assistant, Taylor Fisch, it’s not so much what is seen, but what is unseen. Behind the digital cloud are massive server farms using up power to ensure every selfie and video is available when we need it. 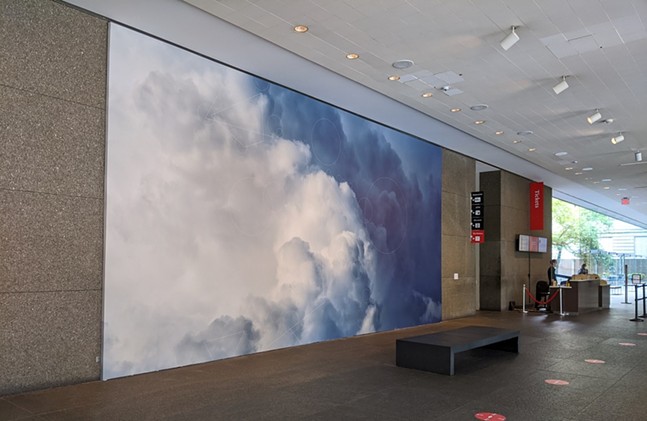 CP photo: Amanda Waltz
CLOUD #902 Scale Invariant Feature Transform; Watershed at CMOA's Trevor Paglen: Opposing Geometries exhibit
What appears to be a more process-driven show, however, gives way to the haunting visual works in Gallery One. A mix of landscape photography and portraits, many of them new, original works produced for Opposing Geometries, line the long, hallway-like space.

The landscapes, all of which are hanging together on the one side of the gallery, are much like CLOUD #902, seemingly unspectacular photos until you get closer and catch the tell-tale lines and circles placed there by a critical artificially intelligent eye. The Black Canyon Deep Semantic Image Segments lacks the clustered shapes, but there’s something more haunting and uncanny about it, its water and rocky, scrub-covered features swathed in an odd mix of reds, oranges, and greens. The effect becomes clear when you learn that the piece was created with autonomous vehicle software. The manipulated images point to how technology has been created to identify and commodify natural spaces, judging them not based on their beauty but by their potential for development or as places through which we can drive our unmanned cars.

Opposite the landscapes are portraits exploring the sinister, dehumanizing effects of facial recognition technology and the surveillance state. The works and their intended purpose are especially relevant now, as photos posted on social media and elsewhere are growing potentially more accessible to corporations, law enforcement, and government agencies, who would use them for everything from targeting ads to targeting people (the latter was demonstrated recently with concerns over police using facial recognition to identify protesters in Pittsburgh).

Even so, given that the technology is still in development, and driven by human biases in the predominantly white-led tech world, the margin for error is wide, meaning that subjects, especially those who are Black and brown, could be wrongly charged. It also applies to Pittsburgh as a growing tech hub, where engineering students at Carnegie Mellon University and employees at the city’s Uber headquarters, are, for better or worse, studying and perfecting these very technologies.

Two black-and-white prints, the subjects made anonymous with blocks over their faces, as well as a line of several color prints, all have computer-generated lines, or lettered points dotting the bridges of noses, mouths, and other facial features. Leers explains how the black-white images point to facial recognition’s past when widely available mugshots were used to test and train the technology. These flow into the more current color prints, part of a 2017 series called It Began as a Military Experiment. Originally shown at the MoMA, the series uses ten photographs of military employees whose images were used in the mid-1990s to develop Face Recognition Technology (FERET) by the US Department of Defense. That their likenesses were most likely used without their consent or knowledge becomes even more disturbing when you learn that they are part of a database of thousands of images fed into the program.

Heading up the gallery are two works pointing to how facial recognition technology denies us our humanity and individuality through Eigenface, a method defined simply as a machine creating a single face from reading and combining multiple images. From that perspective, the prints demonstrate how, to a computer, two of history’s most respected intellectuals, French writer Simone de Beauvoir and playwright Samuel Beckett, are nothing more than a collection of pixels. 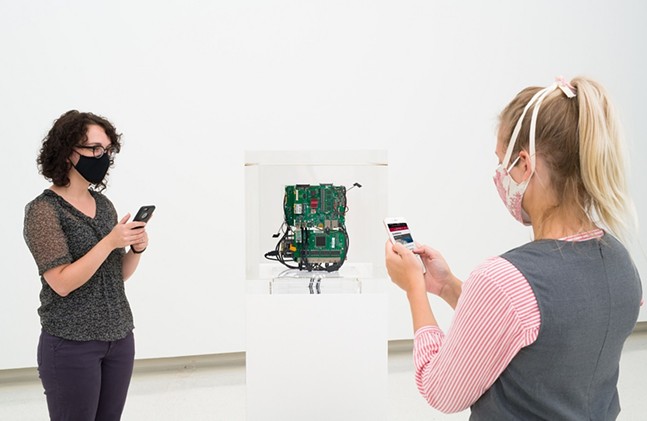 Photo: Bryan Conley, courtesy of Carnegie Museum of Art
"Autonomous Cube" at CMOA's Trevor Paglen: Opposing Geometries exhibit
Rounding out the exhibit is "Autonomous Cube." An indistinct clump of wires and computer paneling sits alone in Gallery 16, encased in a plexiglass cube. But those with smartphones will find an option to connect to an “Autonomous Cube” WiFi network, making the sculpture one of the few interactive works at the museum that comply with COVID-19 safety guidelines. While not much to look at, "Autonomous Cube" offers a digital safe space in the form of a Tor network, meaning the user's online activity is blocked from ever-watchful browsers and internet sites tracking and gathering every search term and download.

Less tech-savvy art lovers looking to better understand Paglen’s exhibit can look forward to a variety of free programs, including a series of online workshops with artists Mimi Onuoha and Diana Nucera, a podcast, and a book all deconstructing this overwhelming, and understandably intimidating subject matter.