Tres Rios, on the South Side, offers Mex-American fare

It’s hip, it’s friendly, and the food is good 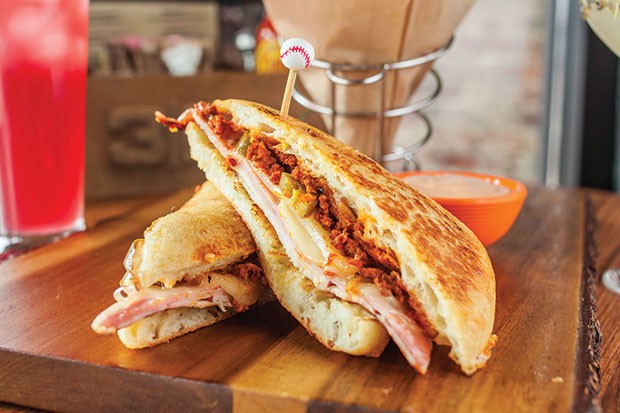 When Pittsburgh was a factory town, it was, famously, so dark from pollution that the streetlights sometimes shone at day. Today, with the factories gone and the air scrubbed clean, it has become fashionable to eat in restaurants inspired by the old industrial “aesthetic.” Furnished with blackened gas pipe, dim Edison bulbs and ubiquitous chalkboard paint, these restaurants can feel as seriously gloomy as a Pittsburgh afternoon in 1942.

Which might be why were so charmed by the quirky decor of Tres Rios, “South Side’s newest Mexican kitchen and tequila bar with an iconic Pittsburgh twist.” Oh, there are Edison bulbs. There’s even barn wood, which has somehow gotten caught up in the industrial-interior playbook. But there’s also a big glass-topped table built from old gears, cranks and assorted detritus welded into a sort of weird, wheeled chassis like a factory-seconds Frankenstein’s lab slab. Elsewhere, lengths of heavy chain form a curtain of sorts between the bar and a booth. And in place of darkness, there’s bright lighting and big, bright paintings of tacos done in the pop-art style of Andy Warhol. It’s all a bit of a happy mess.

The food was artfully served as well. A sandwich arrived on a polished slab of tree, its natural edges left intact, and chips in a cone of paper held by a sculptural wire frame. Even simple empanadas on a plate were arrayed with care and sauced for visual effect. This artfulness was a pleasing way to elevate a menu that floated between fairly straightforward Mex-American fare and modern, inventive dishes more inspired by than derived from traditional Mexican cuisine.

Next visit, we’ll definitely try the shrimp ceviche on a bed of sweet-potato pureeé. On our first, the more fundamental pleasures of the house nachos were irresistible. Its meats — lamb, pork belly and grilled chicken — were superb, with the shredded barbacoa lamb particularly intensely flavored and alternating between juicy and crusty. Only the assembly was, uncharacteristically, rather careless, with the meat mostly in a single layer between two piles of chips and the white cheese sauce blobbed on at random.

Empanadas are frequently wrapped in a fairly substantial, pie-like crust, but those at Tres Rios had a lighter, flakier crust that became almost as papery as puff pastry in the fryer. Fillings were a bit scant, but we were OK with that when the wrapper was this exceptional.

Similarly, the chicken quesadilla was distinguished by the airy, flaky texture and almost smoky flavor of its toasted flour tortillas. Inside, the chicken was the same moist, flavorful, griddled bits — not shreds — we’d enjoyed in the nachos.

Pato tacos featured rich, braised-duck-leg meat topped with both mango salsa and jicama slaw, plus spiced crema. The meat was extraordinarily juicy, and its unctuous texture played wonderfully against the lightly crunchy slaw and mildly sweet salsa. The only flaw was the tortilla itself, a housemade corn version that was almost crepe-like, with a smooth, semi-glossy surface and too much heft. Filled with more pedestrian ingredients, it would have brought the whole taco down.

Tres Rios’ burrito mojado came stuffed with a choice of meat (we picked barbacoa lamb), black beans and rice, and was draped in two sauces: guajillo ancho pepper and cheese. It seems churlish to complain about too much of that excellent lamb, so suffice it to say that the meat was present out of all proportion to the rice and beans.

Tres Rios offers tortas, or Mexican-style sandwiches, but none were served on the traditional sort of crusty-soft roll. Instead, our “Mexicuban” torta came on a ciabatta, which would normally be too hearty for a pressed Cuban. But when spicy chorizo, chile ancho mayo and beer-braised jalapeños were added to the mix, the more substantial roll came into its own, providing safe, starchy harbor for all that flavorful goodness.

Yucca fries were an obvious swap for potatoes, but yucca’s a tricky root, far starchier than spuds. Tres Rios is the first local place we’ve been served truly excellent yucca fries: thick wedges that were fluffy within, firmly crusty without, and addictive with salsa or the aforementioned ancho mayo.

Tres Rios is a bright spot on the map of Mexican-ish food and drink in Pittsburgh. It’s hip, it’s friendly, and the food is good.