The end result is bluegrass with a rocket up its ass 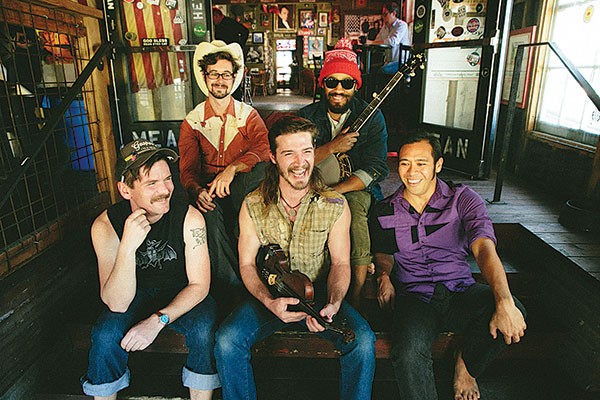 If you go see Austin-based bluegrass quintet Whiskey Shivers, don’t expect to see a traditional interpretation of the genre in the spirit of Flatt and Scruggs. This is more like the freaky banjo-playing kid from Deliverance hopped up on meth, Mountain Dew and broken dreams.

The music is frenetic, but because it features fiddles, banjos, an acoustic guitar and the occasional washboard instead of electric guitars, the end result is bluegrass with a rocket up its ass.

The band has been around since 2009, and out of deference to traditional bluegrass music, it calls its iteration “trash grass.”

“We try to avoid calling ourselves bluegrass, because there are a lot of people that hold on to the traditional sound closely and would hate to hear the sound that we’re making be referred to as bluegrass,” front man and fiddler Bobby Fitzgerald told online entertainment magazine Smile Politely earlier this year. “We play a lot of traditional music and traditional songs, but speed them up a little bit. Maybe make them a little more crunchy.”

The best way to prepare for seeing this group live is to watch the video for the song “Gimme All Your Lovin’,” off Whiskey Shivers’ 2014 self-titled record. Fitzgerald’s voice is raw but melodic, as he rips through the lyrics while playing the fiddle. It’s the type of song you’ll find throughout the record. But the real “personality” comes out in the visual: The band has morphed into one giant creature, stacked up under a red plaid shirt, with its various limbs each playing a different instrument; occasionally, a face peeks out from behind a button to sing backup. The end of the video scrolls down the beast and reveals something shocking under the floorboards.

The imagery is out there, to say the least, but so is this band. And that’s a really good thing.