Transition makes planning for life in a post-oil world seem possible, even desirable. 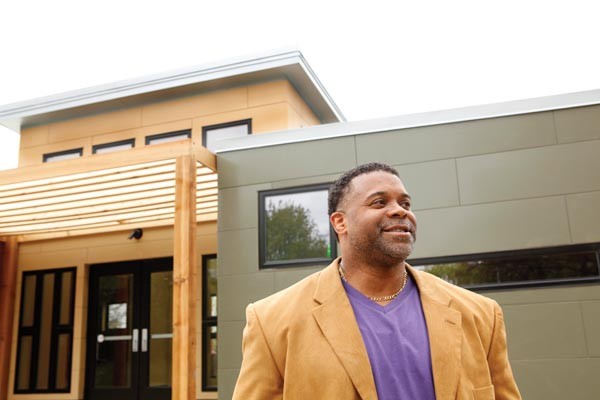 Photo by Heather Mull
Fred Brown of the Kingsley Association, a nationally known Transition Town trainer, is helping push forward that and other green initiatives in Larimer.

For information on local and national efforts to build communities resilient in the face of peak oil, climate change and global economic instability.

What does the future look like? Many people imagine it'll be like today, only moreso: faster, flashier, more globalized.

But in the low-profile neighborhood called Larimer, they're busy actually planning for a different future, one that doesn't look much like the present.

In January, several Larimer residents were among three dozen trainees who spent a weekend at the Kingsley Center learning about something called Transition Town. The international movement assumes that soon, things like climate change, dwindling supplies of oil and increased global economic instability will make us live differently — probably a lot differently.

Transition is a way for communities to plan for themselves how they'll thrive in the face of those challenges, while creating a more sustainable society.

Strategies include relocalizing our economies and sharing skills and other resources. But Transition isn't just about community food gardens and solar panels. It's also about reconnecting neighbors split apart by insecurity, job loss and economic competition.

"I think we're feeling hopeless," says Karla Boyd, one of the Transition workshoppers at Kingsley. "This is going to help me take action."

In England and elsewhere, Transitioners have planted gardens, created solar-energy projects and crafted plans for life without oil. Some communities have even issued their own currencies, to strengthen their local economies.

Transition's collaborative, grassroots approach is also gaining traction in the U.S. And while it has yet to catch on in most Pittsburgh communities, some residents of Larimer have seized on it. Transition, after all, complements their ambitious vision for turning a poor, half-vacant neighborhood into a largely self-sufficient urban oasis. One small, predominantly African-American community, in other words, is taking the concept further than anyone else around here has managed.

A more sustainable society "doesn't feel like it's something that's out in the sky here," said workshop participant Tosha Brown, 31, of Bloomfield. "It feels like it's happening already."

Ask most Americans to describe life without oil, and you'd probably hear a vision of the apocalypse ... or silence. Practically everything we eat, own or do depends on cheap fossil fuels — from the gas in our tanks to the petroleum-based plastic in our toys, and the fertilizer on our farms.

But when Fred Brown — the Kingsley Association's amiable, barrel-chested associate director of program development — asks his Transition trainees in January to envision a post-petroleum future, he gets a much different response. The three dozen participants envision a quieter, better-smelling neighborhood — one where there's a community bread oven, and kids can play outside.

Part of Transition's appeal, in fact, is that it makes planning for life in a post-oil world seem possible, even desirable.

And indeed, the dangers posed by fossil fuels are more apparent every day. They contribute to climate change, which will likely increase extreme weather like droughts and floods — undermining economic and political stability worldwide.

And fossil fuels aren't just environmentally ruinous; they're also finite. Eventually, we'll hit what experts call "peak oil" — the point where global oil production begins its inevitable decline. (Some, including the International Energy Agency, say we're already there.) Books like Richard Heinberg's Powerdown (2004) argue that we need to prepare now. After all, oil doesn't have to actually "run out" to cause problems — it just has to get too expensive to use.

In 2005, President George W. Bush's Department of Energy issued a report titled "Peaking of World Oil Production." It warned that with peaking, "liquid fuel prices and price volatility will increase dramatically, and, without timely mitigation, the economic, social, and political costs will be unprecedented."

What if instead of $100, oil cost $200 a barrel, as some observers warn it soon might? Communities dependent on global supply chains for food and other necessities would face peril: How would they feed themselves and keep warm?

Don't count on natural gas or coal to save us: Neither is as easily used to fuel transportation as is oil. And renewables, for all their promise, are a long way from providing the massive, easily portable jolts of energy on which we rely.

Such considerations get little public discussion. Neither governments nor corporations are addressing the issue; instead, they keep reassuring us that our high-consumption lifestyle can and should continue indefinitely. As the international Transition Network's "cheerful disclaimers" put it: "If we wait for government to act, it will be too little, too late. If we act as individuals, it will be too little. If we act as communities, it might be just enough, just in time."

Transition is about facing global challenges on a local scale. Very local, in fact. Starting in 2004, British educator Rob Hopkins began helping the tiny Irish town of Kinsale develop an "energy-descent" plan for coping as cheap fuel dwindles. The plan stated that in 16 years, Kinsale would go from importing most of its food to growing it, with food gardens replacing lawns, and fruit trees lining the streets. Energy would be localized, wind turbines exploiting another native resource. Education would focus anew on skills of self-reliance, like food production and shelter-making. Health care would shift toward prevention and natural healing. (Pharmaceuticals too are petroleum derivatives.) Transportation would move from a single-passenger-car model to biking, car-shares and public transportation. The economy would adopt a local currency and time-banking, the latter a way for people to trade skills and services without cash.

In 2006, in the English town of Totnes, Hopkins followed up by founding Transition as way to help other communities create such plans. It's a combination town hall, encounter group and barn-raising effort. Structured as a series of community workshops and brainstorming sessions, Transition uses education and dialogue to build consensus on the way forward, reconnecting people isolated by the far-flung, everyone-for-himself lifestyle fossil fuels have enabled. In his Transition Handbook, Hopkins often references England's experience during World War II, when petrol shortages forced communities to grow more of their own food, and many people became better fed and healthier as a result.

The Transition model has spread quickly. There are now 420 official initiatives in towns and cities in 34 countries, including 114 in 32 U.S. states. Domestic efforts are loosely overseen by a Transition U.S., a small, California-based nonprofit that certifies trainers like Brown, who is one of just 22 official Transition trainers in the country.

Peak oil and climate change are scary. But unlike traditional environmental groups, Transition doesn't ask you to fight a single-issue battle against strip-mining, or in favor of higher-mileage cars. Instead, it asks you to imagine the benefits of a world without oil, and to create a holistic, positive vision of self-reliant communities.

During January's training weekend in Larimer, the trainees at Kingsley often spoke approvingly of the Amish, with their tight-knit communities and low-tech, self-sufficient ways. That may seem a surprising vision for an inner-city neighborhood; according to Transition U.S., the Kingsley training was the first in the United States whose participants were mostly black. But the Transition model of consensus building is inspiring, says Raqueeb Bey, a Hill District activist and mother of six.

"It's a really great way to get things done in the community — anything you want to do," she says.

So far, though, getting things done hasn't been easy for Transition Pittsburgh. The group was founded in 2009 by four friends active in environmental and organic-farming circles. But it's struggled to gain a foothold.

To foster the necessary community interaction, Transition Towns need to be village-sized — walkable, like Totnes, or Larimer. So Transition Pittsburgh was created as a "hub" for initiatives in smaller communities. Such efforts have succeeded elsewhere: Village Vancouver, a hub for 15 smaller initiatives, facilitates a tool-sharing program, and serves as a clearinghouse for gardening and composting classes.

But though its mailing list numbers more than 300, Transition Pittsburgh has inspired little concrete action. It began, as Hopkins' Transition Handbook suggests, with awareness-building efforts like environmentally themed movie nights and "gift circles," where participants offer skills or items they possess to those in need. Still, Transition Pittsburgh "was mainly just a place to socialize," says one of its co-founders, Jeff Newman. "It never really reached a broader audience of people who wouldn't be satisfied sitting around a coffee shop just talking.

"A lot of people who are practical-thinking," adds Newman, "tend to get frustrated by the Transition process," which involves a lot meetings and discussion. (While he still supports Transition, Newman himself phased out his involvement last year, to focus on his landscaping and composting businesses.)

Susan Staggenborg, a University of Pittsburgh sociologist studying local environmental groups, says another obstacle for Transition Pittsburgh is that many of its natural allies are busy fighting an urgent battle against Marcellus Shale drilling.

Meanwhile, says Staggenborg, what Transition needs is "some visible projects that show how the culture in Pittsburgh is changing."

Evidence of such change is already visible. Pittsburgh has several urban farms — from the Hill District to Braddock — plus numerous environmental groups and uncounted backyard beehives and chicken coops. Staggenborg suggests that Transition could help provide a philosophical context to link those efforts together. "Things are happening but they don't really have a message for them," she says. "Maybe Transition could provide the message."

And maybe Larimer can provide the example.

Located east of East Liberty, Larimer has already been sown with green projects, thanks to its 2008 community plan. Before anyone here had heard of Transition, the neighborhood had founded its Urban Green Growth Collaborative and remade a complex of vacant lots as a large community garden that produces free vegetables for neighbors. Long-term plans include turning Larimer's perimeter into parks and other green space, while concentrating buildings in its interior.

Meanwhile, says Fred Brown, "Our overarching goal is to take a green community like Larimer and take it off the grid" with wind turbines, geothermal energy, rainwater collection, solar farms and more. "Can we create enough energy in our community that it zeros out [by powering itself]?"

That vision is why Justin Thakar, the Pitt junior who acts as spokesman for Transition Pittsburgh, has been a regular at Larimer's frequent community meetings. Thakar has been taking notes on how Brown is shepherding the neighborhood's green agenda.

Next week: How Larimer became a green leader.