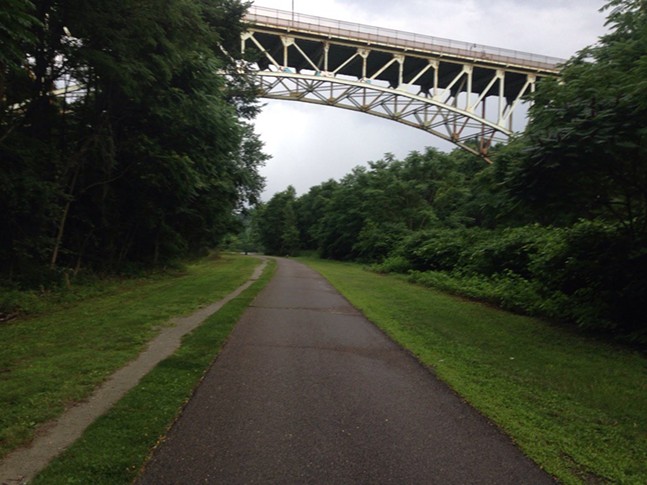 CP photo: Ryan Deto
The Junction Hollow Trail, which would be provided infrastructure improvements under the proposed Mon-Oakland Connector
Without direct federal aid from a stimulus bill, Pittsburgh’s budget is in big trouble. Mayor Bill Peduto has warned against the shortfall the city would have without money from the federal government ever since the coronavirus pandemic started, and those worries haven’t lessened.

Public transit advocates are worried too. Pittsburghers for Public Transit has been calling for transit funding to help the Port Authority of Allegheny County and other public-transit agencies stay afloat during the pandemic.

And these apparent shortfalls have PPT even more concerned about financial decisions Pittsburgh city officials are committing to involving the proposed Mon-Oakland Connector. The project proposes infrastructure improvements between Oakland and Hazelwood in order to improve mobility between the two neighborhoods, whether traveling by foot, bike, scooter, shuttle, or even autonomous shuttle.

It has come under intense scrutiny from neighbors and transit advocates. Still, the city has defended the project as a boost to non-car mobility between booming Oakland and Hazelwood, which is gaining development thanks to Hazelwood Green.

But PPT believes the $23 million the city is planning to dedicate to the project is too high. Especially given that the proposed human-driven shuttles are only projected to 180 daily riders, according to the lasted city presentation on the project. That is significantly lower than the Port Authority’s 93 bus (2,010 daily riders), which already services a route between Oakland and Hazelwood. For comparison, the city is spending about $20 million to help fund the Bus Rapid Transit line between Downtown and Oakland, which will carry a minimum of 43,000 daily weekday riders.

Advocates would rather see city money go to help the Port Authority extend the 75 bus to loop through Hazelwood. The group believes these changes will cost less and serve many more riders than the proposed Mon-Oakland Connector, which they deride as inefficient micro transit.

Public transit expert and consultant Jarrett Walker has criticized micro transit efforts, and explains they are typically used, but not well, as a tool to provide coverage to sprawling suburban areas that may be cost prohibitive to traditional public transit. This is not the Mon-Oakland corridor, however. This corridor is already served by public transit, and neighborhoods are close enough together for biking or even a long walk.

Pittsburgh Department of Mobility Director Karina Ricks acknowledges the city’s likely budget constraints this year, but defends the spending since it is a capital project that won’t be affected by any operating budget shortfalls. She says the capital funds the city is spending will not be allocated to any operating funds for shuttles and instead is meant to provide infrastructure upgrades that can be used by pedestrians, cyclists, and others, including protected bike lanes and improved lighting. This is in addition to improvements that can also be used by shuttles.

PPT and its members will be speaking at the virtual public meeting for the Mon-Oakland Connector, which is scheduled for Wed., Oct. 21 at 6 p.m. Participants can register at mtvpi.com.