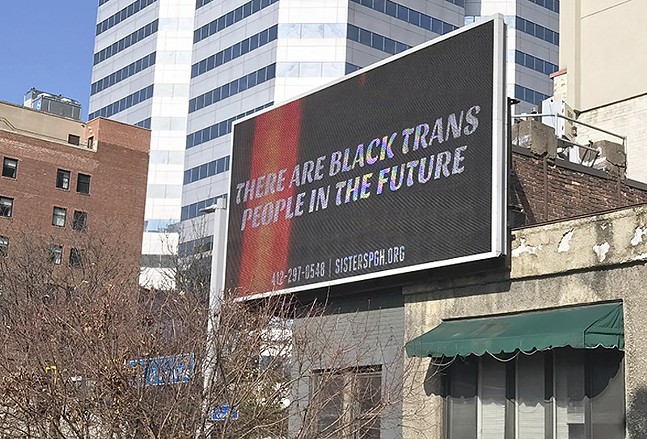 CP photo: Ryan Deto
Billboard in Downtown at intersection Grant Street and Boulevard of the Allies.
Today is Transgender Day of Remembrance, and Pittsburgh is doing its part with a billboard campaign sponsored by local trans advocacy group SisTers PGH. Transgender Day of Remembrance is an annual observance on Nov. 20 to "celebrate the lives of our transgender siblings we've lost over the years, those that trailblazed through life living unapologetically and honorably," according to a SisTers PGH event page.

Due to the coronavirus pandemic, this year SisTers is commemorating virtually and have contracted with Lamar Advertising to display billboards at four different locations across the Pittsburgh region.

The billboards share messages like "Trans Families Matter" and "There Are Black Trans People In The Future." Billboards are located in Downtown at intersection of Grant Street and Boulevard of the Allies, on I-376 between the Squirrel Hill Tunnel and the Turnpike, and on Homestead Grays Bridge heading into Homestead. 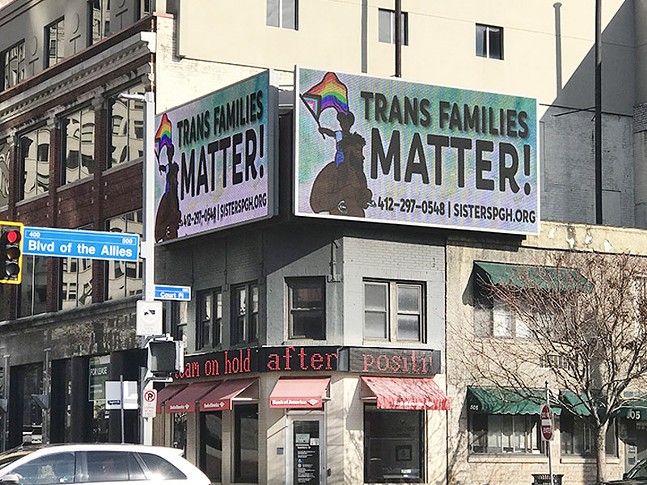 CP photo: Ryan Deto
Billboard in Downtown at intersection Grant Street and Boulevard of the Allies
According to the LGBTQ blog Pittsburgh Lesbian Correspondents, at least 37 trans people have been lost to anti-trans violence this year in the U.S. and its territories. This is a significant increase of deaths compared to the annual total of 2019, and is more than the annual total of 2018.

SisTers wants to increase awareness of Transgender Day of Remembrance this year, which has been especially hard on the trans community. The group is honoring the deaths of Elisha Stanley and Alliyah Johnson.

"As Pittsburgh's leading black transLED nonprofit organization we are honored to lead this movement of remembrance as we know personally how hard it has been losing our trans communities of color around the country, state, and within our own city Pittsburgh," states a post Facebook post from SisTers.

By Ladimir Garcia and Dontae Washington