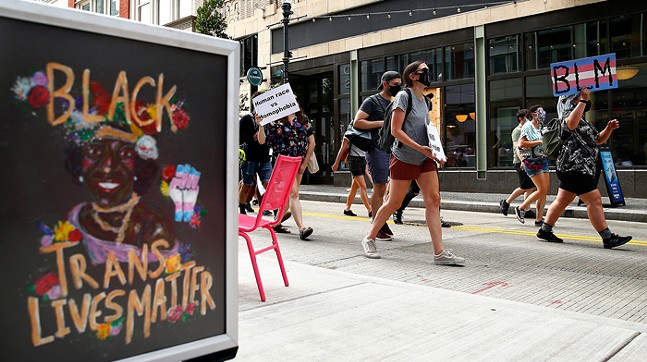 CP Photo: Jared Wickerham
A protest organized by Trans YOUniting marches through Downtown Pittsburgh from the UPMC offices on July 31, 2020
Trans YOUniting announced Sun., May 2 the start of their Trans Crisis Fund on GoFundMe. The Black trans-led organization made the announcement in conjunction with their protest against the trans cycle of violence, which took place on the same day.

The Trans Crisis Fund set a goal of raising $25,000, the first $16,000 of which will go towards paying for a four-bedroom apartment that will be used as crisis housing. The remaining $9,000 will go towards other crisis services, including providing food, clothing, and transportation, all of which will center Black Indigenous transgender and gender-nonconforming people.

The fund will also provide housing crisis stipends to secure and retain housing.

“Black Indigenous Trans People of Color are being failed. BIPOC Trans Lives are the last supported and most vulnerable. Every single system of oppression comes down on our shoulders,” Freedom Foster-Grady from Trans YOUniting says.

While the crisis fund will only cover a one-year lease for their four-bedroom apartment crisis housing, Trans YOUniting intends on renewing the lease through grant money or future fundraising.

In addition to housing support, the Trans Crisis Fund will also provide emergency food assistance in the form of stipends for trans community members to purchase food. Trans YOUniting will also use money from the crisis fund to stock food that it directly distributes.

Funds will also go towards providing winter supplies for unhoused trans people, basic necessities for trans people who have lost their possessions, and clothes for job interviews, along with covering operational costs for the aforementioned crisis services.

Donté Debose
Logo for Trans YOUniting's Trans Crisis Fund.
Trans YOUniting cites statistics from Injustice At Every Turn: A Report Of The National Transgender Discrimination Survey, a National LGBTQ Task Force report from 2011 that demonstrates what Trans YOUniting refers to as the “Trans Cycle of Violence,” including that 26% of transgender people have lost their jobs due to being transgender or gender nonconforming.

“Everyone is failing Black Indigenous trans women of color. Our crisis services take trans lives out of this deadly cycle of violence,” Foster-Grady says.

On the GoFundMe page, Trans YOUniting encourages people to use their financial capital to donate, and use their social capital to promote the crisis fund and convince friends and relatives to donate as well. The fundraiser has so far raised $4,525 towards its goal, with one anonymous donor contributing $2,500.

The representative from Trans YOUniting also encourages people to donate their time to the organization, noting the role of volunteers in the organization’s work putting on six protests last summer and raising funds for Pittsburgh's Trans Defense Fund through GoFundMe, which raised $5,000 to equip BIPOC transgender and gender-nonconforming people with self-defense tools such as stun guns, personal alarms, and pepper spray.

“Our volunteers have made a huge impact for our organization. Our staff is overwhelmed with the work on each of our shoulders,” Foster-Grady says. “The support we get from volunteers has been significantly impactful.”