“This is the last [protest] to be outside, but it’s not going to stop any work that’s being done,” said Dena Stanley, founder of trans nonprofit organization Trans YOUniting, which has organized the weekly marches since August. “We’re still going to be advocating, we’re still going to be educating.”

Stanley said that trans issues tend to get pushed to the side and silenced, adding that the low turnout for the march was an indication of how the trans community is ignored, compared to other marginalized groups and causes.

“When it comes to trans folks, we don’t have that respect that we should. So that’s basically what we’re fighting for — not only the respect, not only to be seen and to be heard, but to have respect,” said Stanley.

Protester Jess Dillon says she has showed up to each Trans YOUniting march over the course of the last six weeks. Dillon, a Pittsburgh student from Philadelphia, said that while she’s here in Pittsburgh, she wants to use her voice about the injustices she has seen.

“Me being a non-binary person when I was just walking to Market Square and I stumbled upon people screaming about trans lives matter I was like, ‘What?’ I think it just feels nice to be represented and to be vocalized about and to be stood up for,” said Dillon.

In addition to amplifying trans voices, the march also served as a remembrance of Walter Wallace Jr., a recent victim of police violence in Philadelphia.

“My sisters are dying in these streets. Every week except for last week, a trans woman was killed,” Stanley told the crowd from the steps of the City-County Building. “This week, a Black man was shot while he was in the middle of having a [mental health] crisis.”

Stanley expressed her exasperation with the inaction from local government about the bigotry, hatred, and cycle of violence she says has been perpetrated onto trans and Black people.

Another protester and speaker, Jalina McClarin, echoed Stanley’s sentiments. She opened up to the crowd about her first experience with systemic racism as a child, drawing comparisons to the late Wallace.

“I was in the fourth grade, and I had brought to school a butterknife and to do a science experience with some fucking magnets. On my way back from school on the school bus, it fell out of my pocket. Some kid said, ‘Oh yeah, that’s Jalina’s,’ and I almost got expelled. I was in fourth grade. I was ten years old,” said McClarin.

Terrance McGeorge, a local organizer from Project Matters, stood in support of Stanley and trans visibility, but he also expressed grief and sadness for Black men, the community, and the violence they face. 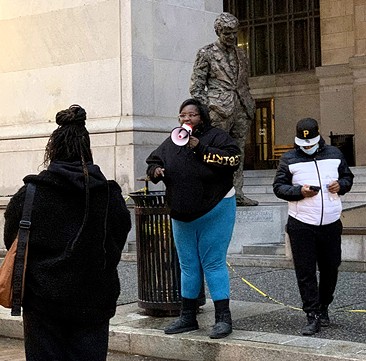 CP photo: Nardos Haile
Trans YOUniting founder Dena Stanley speaks to the crowd during a Trans Visibility demonstration in Downtown Pittsburgh on Thu., Oct. 29, 2020.
“I just don’t have much to say other than I’m just sad. As a Black man here in the United States, you realize that your humanity isn’t respected, realize that your life is in danger just for waking up, walking down the street. Someone can say whatever the fuck they want to say, and it can be very, very traumatic for your life,” said McGeorge.

After the speeches, the crowd marched onto Grant Street in the rain and cold, until it reached Market Square for the final moments of the demonstration.

In the final speeches of the march, protester Chrissy Carter vocalized more frustrations with the lack of policy change in Pittsburgh.

“It shouldn’t take the death of a Black person to get you out here marching. When is enough going to be fucking enough? It’s not about respectability because respectability gets us nowhere,” said Carter. “When has ‘yes ma’am’ and ‘no sir’ ever not gotten no one shot? When has actually putting your hands on a steering wheel actually never gotten somebody shot? They don’t care about us.”