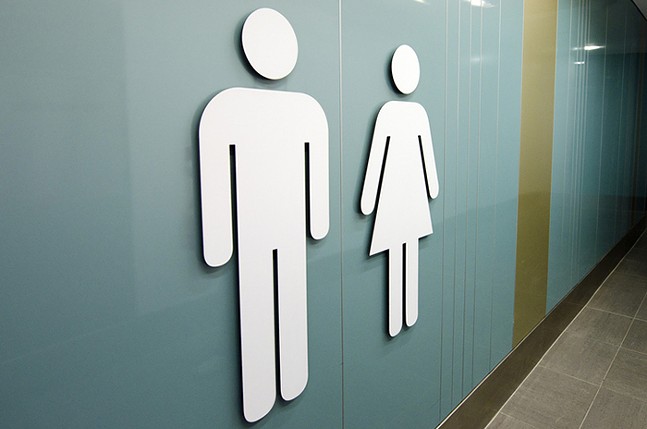 Public bathrooms have become a battleground for trans rights in the U.S., as lawmakers across the country have targeted these necessary spaces as a way to either show support for or deny access to certain groups. As if the issue was not already fraught, one local group is raising awareness of another unexpected hurdle to expanding all-gender bathrooms — the plumbing code.

Trans, Intersex and Nonbinary Alliance, or TINA, a group out of Carnegie Mellon University, has put pressure on the Allegheny County Health Department to change Plumbing Code Article XV so that both new and established buildings are required to provide all-gender bathroom access.

As stated in a press release from TINA, the code "blocks most establishments from creating and properly labeling facilities that accommodate people for whom 'Men’s' and 'Women’s'  rooms do not feel safe or comfortable."

Now, the group is encouraging people to provide a comment or register to speak at an upcoming public hearing on the matter.

Beginning today, the ACHD Board of Health will take public comments and requests over a 30-day period. This will be followed by a virtual public hearing on Tue., June 22, during which the board will hear testimony on "proposed plumbing code revisions which would minimally expand access to All-Gender restrooms," according to the TINA website.

TINA believes changing and enforcing the plumbing code would protect and be more inclusive for all county residents, as well as visitors to the area.

Nica Ross, a faculty member at the CMU School of Drama and organizer with TINA, points out that this is the latest push in a years-long fight to change the code. In October 2019, Pittsburgh City Councilor Erika Strassburger (D-Shadyside) arranged a meeting between the ACHD Plumbing Program, Rep. Dan Frankel (D-Squirrel Hill), and representatives from CMU to address the issue. As TINA puts it, the meeting "ended with no solutions" and no further action from ACHD.

In Sept. 2020, Frankel also sent a letter to ACHD explaining that "a simple language change to the county’s plumbing code would remove the barrier for some businesses and organizations to build inclusive and gender-neutral restrooms."

The 2019 meeting was followed in November 2020 by public comment on changing the code to updated 2021 International Plumbing Code language, which TINA describes as allowing for "wider implementation of single-stall restrooms and spells out a model for multi-stall restrooms that increase user privacy."

Since then, ACHD has provided code changes to the Allegheny Plumbing Advisory Council. However, TINA claims the proposed code changes are "impractical, difficult to implement, and do not come close to achieving restroom access equity in Allegheny County."

Ross says that much of the bureaucracy around the code change comes from the board, adding that plumbing professionals they have met with are open to implementing any mandatory updates to the code.

There's also the problem of plumbing codes taking years to update, with any proposed change not being adopted until 2022. However, Ross claims the ACHD could speed the process by taking desired changes to the Pennsylvania Department of Labor and Industry for approval. They also point out that Pittsburgh could implement its own plumbing code, adding how there are "all-gender restrooms ordinances in dozens of cities," including Philadelphia and New York City.

While many businesses, venues, and other spaces in Pittsburgh have made efforts to provide all-gender restrooms, Ross says it's not enough because "we can't let a building owner determine restroom access."

The issue is also personal for Ross, who identifies as non-binary and transmasculine. They wrote about their struggles navigating gendered bathrooms in an essay for PublicSource and told Pittsburgh City Paper that their experience demonstrates how bathroom access isn't just a matter of convenience, but one of public safety. Ross recounts talking to a police officer who has responded to calls about trans people using a public bathroom, meaning trans bathroom users could face not only harassment but potential legal problems.

Ross adds that the availability of all-gender bathrooms would not only benefit trans or non-binary people, but also parents of small children, people with disabilities, and others who need more accommodations.

"Laws and code are written for able-bodied, mostly white, cis-gender people," says Ross, adding that TINA wants people to question "how complicated did we make things in order to make sure some people couldn't be involved."

Those interested in making a public comment can find a link at the Bathroom Advocacy page on TINA's website. You can also submit a comment by email at PublicHealthComment@AlleghenyCounty.us or by mail to Attn: Article XV Comments (Plumbing) Allegheny County Health Department, 542 Fourth Ave., Pittsburgh, PA 15219.