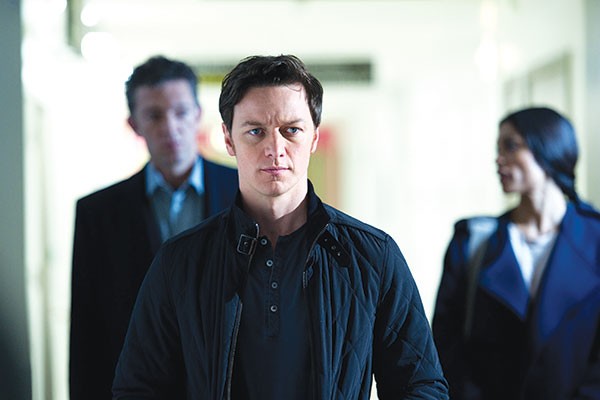 Trance is a glossy neo-noir from Danny Boyle (Slumdog Millionaire) that so very badly wants to wrap you up in its spell. So much so, that like its greedy, conniving protagonists, it just doesn't know when to stop, turning an entertaining whodunit into an exercise in watch-checking.

The McGuffin is a valuable painting, stolen by an art auctioneer (James McAvoy) who then can't remember where he hid it. The gangster (Vincent Cassel) he stole it for is angry, and the pair consults a hypnotherapist (Rosario Dawson) to look for the answer in the auctioneer's tranced-out brain.

After an intriguing start, Trance becomes a loop-de-loop of reality, memory, false memory, good old-fashioned lies and manipulative bed-hopping. The point of view shifts between the three protagonists, but none is a reliable narrator. And there are simply too many "shocking" reveals (and too many delivered as monologues), rendering our experience increasingly distant. We must dutifully wait for Boyle to flip over his final card in order to effectively process what we've seen.

There is pleasure to be had when such sleight-of-hand is done well, but here the dealer is noisily overplaying. Trance isn't nearly as trippy or action-oriented as the trailer suggests, but it still relies heavily on "indie flash" — colored lights, thumping soundtrack and swooshing fast-forwards and flashbacks — not to mention trying our patience with its game-playing.