Trailer drops for Pittsburgh-shot film An American Pickle, making up for the lack of Picklesburgh | Film | Pittsburgh | Pittsburgh City Paper 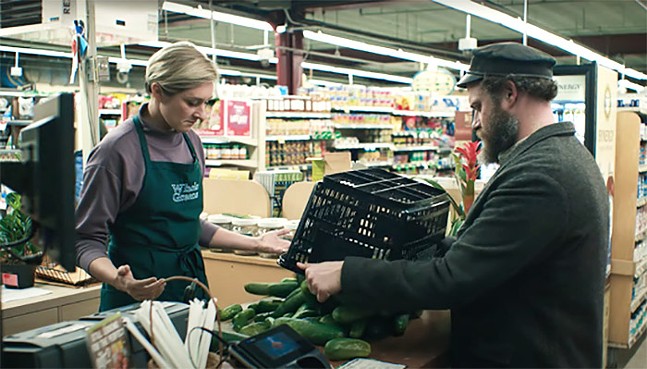 Screenshot of An American Pickle trailer
In 2018, a film crew descended on Pittsburgh to film An American Pickle, a movie starring Seth Rogen as a European Jewish immigrant who falls into a vat of pickles, preserving him for 100 years, and waking up in a modern, trendy New York he doesn't recognize. The story is based on "Sell Out," a multi-part short story by Simon Rich, published in the New Yorker in 2013.

HBO Max, where the film will premiere on Aug. 6, released the trailer today, giving us our first glimpse of Pittsburgh-as-New York. In both the film and the short story, the plot centers around Herschel, the preserved pickle man, trying to connect with his great-great-grandson Simon (both are played by Rogen). In the short story, which is very funny, the humor stems from the cultural difference between Herschel, a Jew from the old country who saves up money to buy his wife treats like "seltzer or salt fish," and Simon, a screenwriter who punches up jokes on a movie called "Zoo Crew."
In the movie, which looks like more of a dramedy, great-great-grandson Simon is a "mild-mannered computer coder." His wardrobe looks vaguely inspired by Wes Anderson movies, and Herschel looks exactly like a 19th-century Jewish man named Herschel. They decide to start a pickle business together, at Herschel's suggestion (It's unclear if the filmmakers knew Pittsburgh literally has an annual pickle festival when they picked the filming location). But in addition to the jokes about the generational clash, the movie also appears to grapple with deeper issues of grief, religion, and Jewish identity.

Look out for some familiar sites, like Liberty Avenue in Downtown, the entrance to the Allegheny Cemetery in Bloomfield, and Butler Street in Lawrenceville. There's even a Jonas Salk reference (Herschel is thrilled to learn he was a Jew, obviously).