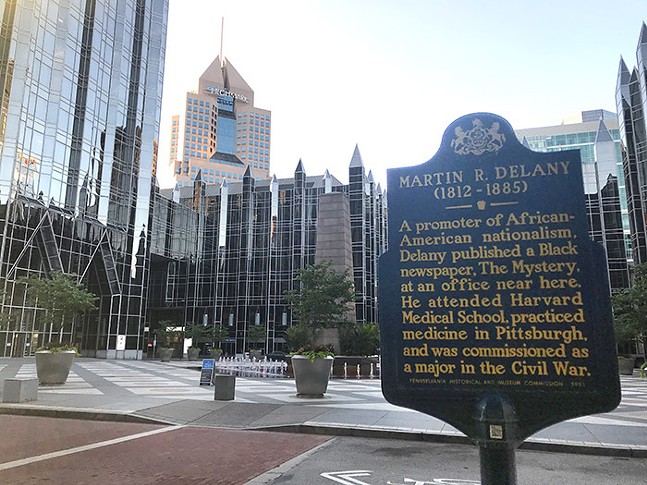 CP photo: Ryan Deto
Martin R. Delaney historical marker in Downtown Pittsburgh
Pittsburgh is a city with no shortage of historical sites to commemorate. At the same time, many remnants of the past have been torn down or forgotten. When it comes to Black history, many sites have either not survived, been looked over, or just not been adequately publicized.

Though some may not know it, Pittsburgh was highly involved in the Underground Railroad, and hosts a number of sites relevant to the often-treacherous passage that enslaved people embarked upon to escape captivity in the American South and beyond. Visit Pittsburgh has a great list of relevant locations, as does this New York Times article from 2017.

Stop The Violence PGH hosted a virtual livestreamed walking tour of a number of Black history sites in Pittsburgh on Juneteenth, and the video is accessible through their Facebook page. While some of the sites no longer exist, others are marked with historical markers to indicate where they once were.

While it’s no longer physically there, the now-demolished Monongahela House Hotel was one of the first large hotels in the city, once located at the corner of Fort Pitt Boulevard and Smithfield Street. The hotel was one of Pittsburgh’s finest, hosting famous guests including many U.S. presidents, notably Abraham Lincoln. It also served as a stop on the Underground Railroad, and the hotel’s abolitionist owner, John McDonald Crossan, employed many free Black people.

Located in Mount Washington in the Chatham Village community, this house was the home of abolitionist lawyer Thomas James Bigham, editor of The Commercial Journal Anti-Slavery Newspaper. As a stop on the Underground Railroad, its location on top of a hill gave it a good vantage point for fugitive enslaved people seeking safety, as well as to preemptively spot and ward off bounty hunters.

This public bath house and barbershop located Downtown between Market Street and where Ferry Street used to be was also a stop on the Underground Railroad. It served as a place for escaping enslaved people to change their appearance to evade capture. They received new clothes and haircuts here. The building’s owner, John Bathan Vashon, a free Black man, founded the Pittsburgh Anti-Slavery Society in the 1830s.

While not an Underground Railroad location in and of itself, this LED light display in Market Square commemorates the first meeting of that same Pittsburgh Anti-Slavery Society. The lights in the plaza are arranged in the same position as the Big and Little Dippers would have pointed at 8 p.m. on June 2, 1835, the time of the first recorded meeting of the organization.

Martin R. Delany was a free Black man who founded the first Black newspaper west of the Allegheny Mountains, The Mystery, which later combined with Frederick Douglass’s North Star. He used his connections in Pittsburgh to protect and aid fugitive enslaved people and help them evade slave catchers. Delany is known as the “Father of Black Nationalism” and was a proponent of a movement encouraging Black people to emigrate from America to Africa. He was also one of the highest-ranking Black officers in the U.S. Civil War.

Homes in the Lower Hill District

Arthursville and Hayti or Little Haiti were neighborhoods in the Lower Hill District home to many free Black people in the Antebellum period. Arthursville was once the largest Black neighborhood in Pittsburgh. A number of private homes in the area were Underground Railroad stops — those of Rev. Lewis Woodson, Samuel Bruce, George Gardner, and Bishop Benjamin Tanner. Some fugitive enslaved people settled in Arthursville itself instead of heading further north to Canada.

Located at 2200 Wylie Avenue, at this church, a group of free Black people signed a resolution in opposition to the Fugitive Slave Act. Across Pittsburgh, but particularly in the Hill District, members of “vigilance committees” looked out for the safety of runaway enslaved people, and churches often served as safe houses.

Owned by a free Black man, John C. Peck, the Oyster House Downtown on Fourth Street between Wood and Market was another Underground Railroad stop. Peck, an abolitionist, was also a deacon and established Wylie A.M.E. Church. He worked with Martin R. Delany on the publishing committee for The Mystery, and was president of the Philanthropic Society, another organization in Pittsburgh that helped enslaved people escape through the Underground Railroad.

Also known as Avery College and later as Avery Memorial A.M.E. Zion Church, this now-demolished building is commemorated with a historical marker at 619 Ohio Street in the North Side, which at the time was called Allegheny City. Founded in 1849 by Charles Avery, a Methodist preacher and abolitionist, the college provided education for free Black people — both women and men. The school was only open for about two decades, but during that time it also served as a stop on the Underground Railroad, with escaped enslaved people taking refuge in the basement.