The Brewery, housed in former concert venue The Shop, will serve coffee during the day

Photo: Julie Kahlbaugh
Bloomfield residents will soon have a new spot to grab a beer when, barring any obstacles, Trace Brewing opens in December.

From the outside, the Main Street brewery doesn’t look like much. It’s decorated by a simple awning and logo, blending easily into the surrounding neighborhood of row houses.

But inside, the brewery and coffee bar seems to go on forever. The building, formerly a concert venue named The Shop with a history that goes back to 1910, presents a unique maze of seating intermingled with open-concept brewing. Brewery founder and CEO David Kushner jokingly calls their space the “Pittsburgh Wild West” — a roof, built in the ‘50s over an alleyway, connects two neighboring buildings which now make up Trace.

Walk inside and to the left, there’s a coffeeshop-style nook. Coffee from local purveyor Redhawk Coffee will be served throughout the day; all of the Trace bartenders are also baristas.

Straight out from the front door is typical bar seating, followed by Trace’s 10-barrel brewing system. Turn left, and there’s the covered alleyway, now styled to be a cozy gathering place. Garage doors open to the deconstructed second building, the roof removed to create an outdoor beer garden. This open-air space sports Grecian-style stadium seating, what Kushner refers to as the “perfect people-watching spot.”

“The whole point is to create space for people that just want to hang out, even if they’re not a beer drinker,” Kushner says, comparing Trace to a similar-style brewery he opened in Boston, Remnant Brewing. “It’s just a space to hang out, meet friends, meet your neighbors, and that’s the central core: finding once forgotten spaces that become warm, community spaces.”

Kushner and his team, who started working on the construction and creation of Trace just over a year ago, designed the labyrinth of a brewery with Bloomfield in mind. 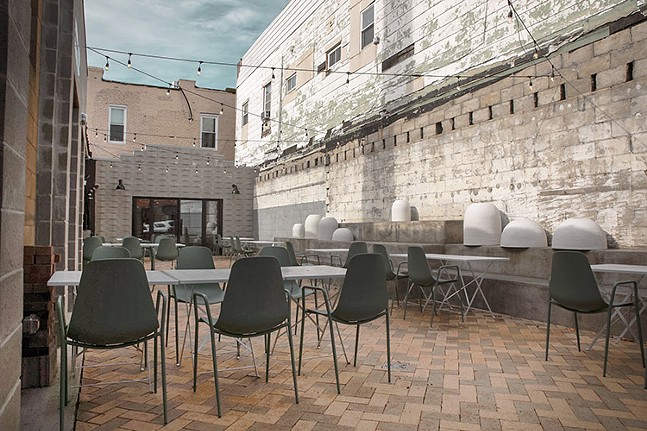 Photo: Julie Kahlbaugh
“We walked around and tried to use materials you see throughout the neighborhood: concrete, brick, things like that. We wanted the space to fit in with the character of the neighborhood,” he says. In addition to their personalized, interior touches, Trace has collaborated with the Pittsburgh Artists Autonomy Coalition to turn the side of their building, on Clement Freeway, into a public, legal graffiti wall.

Beer is under the control of head brewer Brandon McCarthy and head of funk Zack Colton. The duo comes to Trace with years of brewing experience, working at local spots such as Cinderlands Beer Co., Dancing Gnome, Four Points Brewing, and Stranger Roots Experimental Ales.

(Between them, the full Trace team — which includes general manager Katie Rado — have 25 years of industry experience.)

Along with their typical brewing system, Trace is home to two fermenting tools: two 10-barrel foeders and a koelschip.

Rather than ferment in stainless steel tanks, these beers sit in either foeders — large, wooden barrels known for adding a “funky” sensory profile to beer — or the koelschip, which introduces natural, wild yeast to fermenting beer.

The koelschip is held in a room of its own, next to the brewery’s outdoor beer garden. The room is almost like a sauna — it even fills with steam — covered in fragrant wood to aid the fermentation process. And, since they’ll only be using the koelschip a few times a year, Trace has designed a tabletop cover so the room can double as overflow seating.

With their diverse crop of equipment, a “brewer’s playground,” Kushner doesn’t imagine that Trace will open with flagship beers. He guesses that hoppy selections will be best sellers, but the tap list will feature a mix of styles.

“Between Brandon and Zack, with the breweries they’ve worked for and experience they have, they can brew any beer under the sun,” says Kushner. “They’ll just kind of run wild with it, depending on the time of year and what people want.”

Trace’s tap system has the capacity to hold 16 beers, but Kushner says they’ll have between seven to 12 on at one time. Five of those beers will come straight from carbonation tanks, which Kushner calls the “director’s cut” of beer. The brewing team also has plans to start barrel aging brews.

They plan to distribute a limited amount of beer to local craft beer stores and bars, but Kushner hopes for the majority of Trace beers to be consumed on site.

“We didn’t set up shop here, in the heart of Bloomfield, to be a shop that distributes 50% of its beer,” Kushner says. “We want people to drink 95% of the beer right out of the tanks.”

The brewery also runs a vocational program, which will welcome its first participant this month. Their six-month curriculum is designed to prepare and set members up for careers in the brewing industry. This will include working hands-on with McCarthy and Colton.

“Our hope is that not only in five years people will be able to look back and see a more diverse brewing industry, and they’ll see that lineage helped start with Trace, but that other people will take the idea, and we can say we’ve created a more diverse community,” Kushner says.
Trace Brewing. 4312 Main St., Bloomfield. tracebloomfield.com