Despite amusing dystopic trappings, this actioner doesn't leave an impression 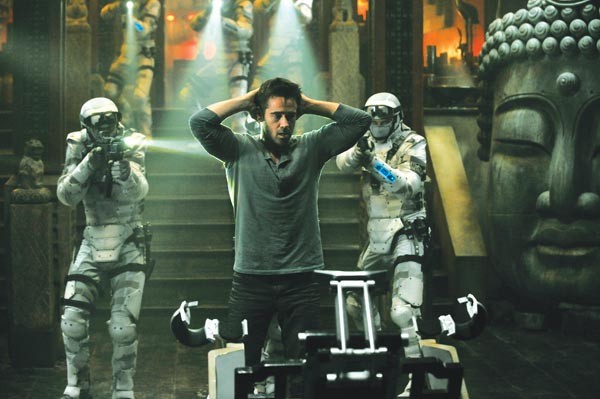 "What is life, but our perception of it?" asks a dude in Total Recall. No need to think about that, because a gun battle breaks out almost immediately. And that pretty much sums up Len Wiseman's actioner: a film with glimmers of provocative ideas that assumes viewers just want to watch stuff blow up and see two gorgeous women get in a fistfight.

In the future, most of Earth is uninhabitable (and yet, somebody figured out a way to put a high-speed commuter rail through the molten center of our planet). Everybody is crammed into two locations: the upscale center of power known as United Federation of Britain and The Colony (formerly Australia). The Colony, a watery slum-megalopolis with a strong overlay of Bladerunner aesthetic, is where we find our hero, Douglas Quaid (Colin Farrell).

Weary of his "shit job" building robot-cops in the UFB, Quaid visits Rekall, a service that promises to implant him with better — if false — memories. He opts for "double-agent spy adventure," but the process short-circuits when the fake memory encounters reality. Turns out Quaid is a spy!

So now he's on the run, trying to figure out who he is, why his wife (Kate Beckinsale) is trying to kill him, whether he's got a thing going with an anti-government rebel gal (Jessica Biel) and just which side he's fighting for. Needless to say, most of this takes the breathless form of chases, gunplay and brawling, with a few stops for memory re-boots.

Speaking of memory, no need to remember the 1990 Total Recall set on Mars, or the Philip K. Dick short-story source material. This film takes fresh and utterly unrelated liberties.

Total Recall incorporates plenty of au courant window-dressing about income disparity, strategic terrorism, surveillance and how to best control people's minds. It depicts a world awash in disinformation (the sensurround of advertising; false-flag operations) and altered realities (being watched over by "synthetics"; acquiring fake memories). But the film offers nothing meatier to ponder than what what's in the safe-deposit box or how Beckinsale keeps her hair so shiny. The societal ills depicted in Recall have corollaries in our reality, but the "solution" proffered is both primitive and meaningless. (Hint: Boom!)

Even our poor hero is unsure what he's fighting for, or whether he even cares. Farrell is always fun to watch, but Quaid is surprisingly passive, a confused, manipulated false-hero whose actions are dictated by others. Call him "The Pawn Who Survives." And to riff on the original query: "What is an action-film star, but our perception of him?"