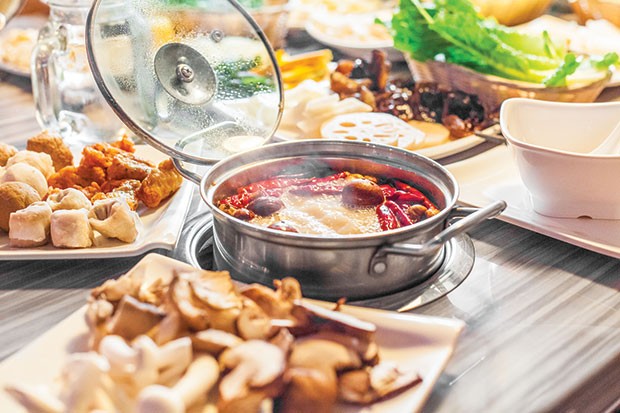 Many cultures have evolved styles of communal, one-pot cooking, especially those with winters that force people to huddle together indoors, seeking sources of heat and warm sustenance. Japan alone has several related but distinctive hot-pot traditions, together known as nabemono (“boiled things”). Until recently, this was just another obscure corner of Japanese cuisine overlooked in the American affinity for sushi. But given Pittsburgh’s climate, is it any surprise that Japanese hot pots are finding a market here? We’re more surprised it has taken this long.

In the heart of Oakland, Top Shabu Shabu takes its name from one of these styles of Japanese one-pot dining. Shabu shabu, in turn, takes its name from Japanese onomatopoeia for the sound of cooking. In shabu shabu, diners are provided with a menu of raw meats and vegetables, thinly sliced, which they cook themselves at the table in pots of boiling broth and eat with dipping sauces and condiments. It’s related to sukiyaki, but with flavorings more savory than sweet.

Top Shabu Shabu is, perhaps, as much a testament to Pittsburgh’s growing Asian university population as to its long, cold winters. It’s an unabashedly Asian restaurant; other than the English on the menu, nothing about it is tailored to American expectations. From the cool colors and polished stone of modern, cosmopolitan Asia, to the few, if any, concessions to American tastes on the menu, Top Shabu Shabu caters to its dining room filled with Asian and Asian-American customers, effortlessly navigating the complexities of tabletop boiling and barbecue.

That’s not to say that less-experienced guests aren’t welcomed. On our visit, multiple servers stopped by to assist our party, both explaining the system and checking in to make sure things proceeded correctly, never condescending or interrupting.

On paper, shabu shabu is fairly simple: You choose from three broths, which are delivered to your table in a pot and lowered into a receptacle with a heating element, such that the broth bubbles. You order from a wide array of proteins, vegetables and starches, and then cook them in the broth to your taste: longer for roots, but briefly for greens and shaved meats. Then you fish them out with a slotted ladle and finish with an array of sauces and condiments like minced garlic or cilantro.

The trick is not so much in the cooking but in the flavoring. Although the broth was studded with aromatics like ginger and tamarind, most of the ingredients weren’t immersed in it for long enough to take on those flavors, and so relied upon the post-boil dipping sauces and condiments for rescue from utter blandness. Here, our inexperience put us at a disadvantage. While the solicitous staff could direct us to the condiment bar, no one can, of course, tell another what will taste best to them, leaving us to experiment with familiar (soy sauce) and less familiar (“hot pot sauce”) dips. Suffice it to say that there was a learning curve.

The Korean barbecue was more forgiving. Also set into the table was a sort of electric grill with slots for fat to drain. The heat was rather modest, but the meats came sliced thin, so intensity was beside the point. Pork belly came with sliced onion and jalapeños to help build flavor, as well as a thin basting sauce. After multiple turns and bastes, a pair of scissors cut the strips into bite size, and they could be folded into romaine leaves for eating.

We also ordered a couple pre-cooked appetizers and simple maki rolls from the recently added sushi bar. Fried dumplings were filled with chicken, not pork, but still packed plenty of flavor within a light wrapper browned to a crisp on just one side, leaving the rest of the dough cooked but pliant. Scallion pancakes had golden-brown, flaky layers sheathing off. Beneath those layers they were perhaps a touch tough, but quite tasty.

In the sushi, we appreciated that the rice was warm; the contrast between cold fish and warm rice being an element of sushi is all too often overlooked. But the best part may have been the salmon roll that was teardrop-shaped and then arrayed like leaves on a branch. Sushi at places where it isn’t the menu mainstay too often skimp on presentation, which is one of the pleasures of this iconic food.

But the real reason to go to Top Shabu Shabu is in the name. Shabu shabu is communal, it’s cozy, and it’s fun. Go with a big group, order a whole bunch of soup ingredients (did we mention the mixed mushroom basket, with five varieties?), and enjoy this authentically Asian experience.