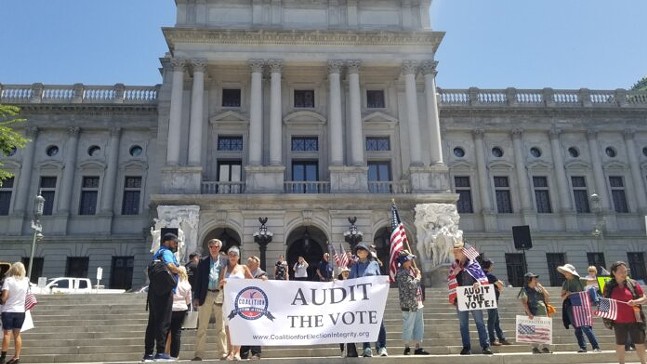 Senate State Government Committee Chairman Dave Argall (R-Schuylkill) told the Capital-Star that he was considering subpoenas for ballot information, but had not considered which jurisdictions would be subpoenaed yet.

“There are a lot of things under consideration right now, and I told them to check back in a week or two and we hope to have some more detail,” Argall told the Capital-Star of the meeting.

The Pennsylvania Department of State, which administers elections, already conducted a risk-limiting audit of the 2020 election, which found “strong evidence” of the vote count’s accuracy, despite baseless claims to the contrary by former President Donald Trump.

Still, the claims have fueled opposition among thousands of Trump’s supporters, which has put pressure on Republican lawmakers.

In Arizona, the GOP-controlled state Senate subpoenaed ballots in Maricopa County to conduct its own election review, which is ongoing.

Pennsylvania audit supporters have gathered under the banner of “Audit the Vote PA,” a grassroots group based in Western Pennsylvania.

Argall met with the group June 17. About 50 of them gathered on the Capitol steps at midday Wednesday to call for a legislative-led review of the 2020 presidential election results in Pennsylvania.

“Prove us wrong,” the group chanted, waving signs, listening to speeches, and praying before entering the Capitol.

Besides Argall, at least three other GOP lawmakers — including Mastriano and two Lancaster Republican state representatives, Dave Zimmerman and Brett Miller — chatted with the activists in the Capitol hallways.

Argall has also been in the sights of Trump, who mentioned him and Senate President Pro Tempore Jake Corman (R-Centre) by name in two statements this month.

“Corman is fighting as though he were a Radical Left Democrat, saying that a Forensic Audit of Pennsylvania not take place,” Trump’s statement on June 14 said. “Why is Senator David Argall playing the same game? Are they stupid, corrupt, or naive? What is going on?”

In a message to supporters in its Telegram channel, an encrypted social media messaging app, Audit the Vote told supporters that Argall did not commit to an audit in the meeting, so they were proceeding to a “Plan B.”

“We served Senator Argall with a notarized affidavit for maladministration for not listening to the people he is hired to represent,” the group said.

The group claimed violating this affidavit would result in a $1,000-a-day fine for every day Argall “chooses to do nothing.”

One legal expert scratched their head at the threat.

“A private group of citizens — without filing any suit in court — just announces that it’s going to ‘fine’ a legislator $1,000 per day if he does not respond to their requests?” Widener University Law School professor Mike Dimino said in an email. “No, such a threat would not carry any legal authority.”

Argall said he had received the group’s legal threat, and demurred on its efficacy.

“We’ll let the lawyers sort that one out,” he said.

Argall added that the Senate would likely advance voting legislation early next week, on Monday or Tuesday.

A report released by a Senate special committee this week recommended similar policies as an advancing bill. They include regulations for ballot drop off boxes, time for counties to process mail-in ballots before election day, and shifting voter registration and ballot requests deadlines further from Election Day.
Stephen Caruso is a reporter with the Pennsylvania Capital-Star where this story first appeared.