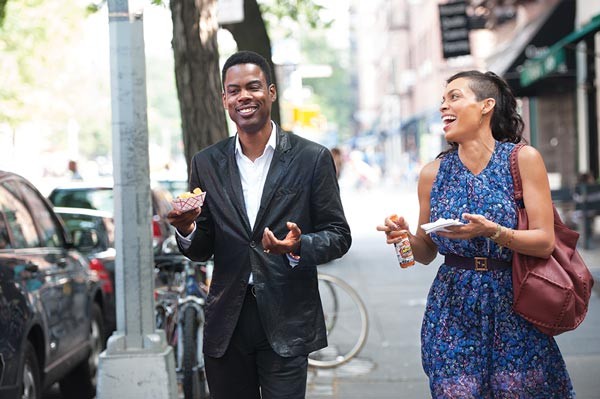 Chris Rock writes, directs and stars in this comedy about a comedian, Andre Allen, who, tired of playing a silly character ("Hammy the Bear"), is trying to go legit as a serious actor. The film, which takes place over a day, has him out promoting Uprize, his earnest account of a Haitian slave rebellion. He's also juggling two women — his fiancée (Gabrielle Union), who has turned their nuptials into a reality-TV series, and Chelsea (Rosario Dawson), a reporter trying to ferret out who Allen really is. Dawson and Rock have an easy banter, and their riffs on subjects trivial and serious are the most solid part of the film. (Ignore the clunky rom-com aspect.)

Top Five presents a mix of mildly provocative topics — race, gender, media — and cheerfully vulgar, crowd-pleasing set pieces rooted in sexual adventure. (You may never divorce Cedric the Entertainer from his outrageous scene here.) You might wish it were sharper and smarter throughout — Rock is better than rolling out another gross-out scene. And Rock was certainly generous to his comedian buddies, giving plenty of screen time to cameos by Kevin Hart, Jerry Seinfeld and many more.