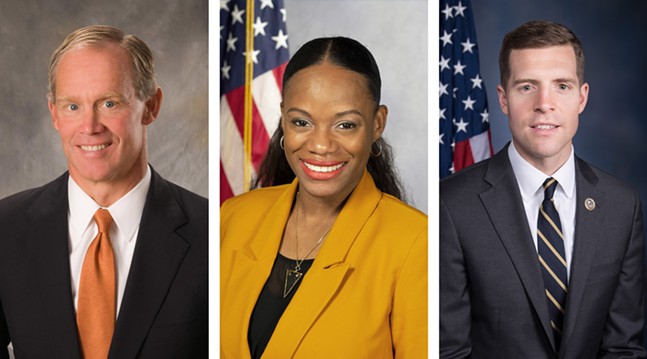 Mike Turzai (left), Summer Lee (center), and Conor Lamb (right)
Republican U.S. Sen. Pat Toomey’s announcement that he will retire from politics in 2022 has served as a starting gun of sorts for speculation about that year’s two marquee Pennsylvania races: U.S. Senator and Governor.

In one fell swoop, Toomey took his name out of the running to replace current Democratic Gov. Tom Wolf, and assured a political free-for-all in at least three of the four primaries that’ll take place that spring.

With Republican and Democratic nominations for both governor and U.S. Senator open, several politicos are predicting that a slew of candidates could end up throwing their hats in the ring.

“Nothing replicates being a key swing state in 2020 in terms of excitement, but 2022 in Pennsylvania will be a pretty engaging second act to what’s going down here right now,” Chris Borick, a political scientist at Muhlenberg College, in Allentown, said in an email.

On the Democratic side, the governor’s race appears less fluid, as state Attorney General Josh Shapiro (D-Montgomery) is viewed as likely to run to replace the term-limited Wolf.

Lt. Gov. John Fetterman (D-Braddock), floated a 2022 senatorial run as early as 2017. He now appears uncommitted to any race, telling Politico that 2022 was “wide open.”

One thing is clear — there will be pressure from Democrats growing progressive left for a diverse slate in a state that has never elected a woman or person of color to the U.S. Senate or governorship.

“We deserve a more diverse group of candidates than all white men,” state Rep. Summer Lee (D-Swissvale) told the Capital-Star.

“The time for Men-nsylvania must end,” the operative said.

Lee did not comment specifically on her 2022 plans. In a statement to Politico, Gym also did not address her plans.

One other newly elected Democratic firebrand, state Rep. Malcolm Kenyatta, of Philadelphia, put out a one word statement on Toomey’s announcement: “Good.”

Contacted by the Capital-Star, Kenyatta did not specifically comment on 2022, pointing instead to electing former Vice President and Democratic presidential candidate Joe Biden next month.

That election could loom even larger for the Republican field, with Toomey officially out of the way.

Many of them, according to Politico, punted on making a final decision until after the November election, when President Donald Trump will seek a second term.

One other big name, former House Speaker Mike Turzai (R-Marshall) could still be in play. According to a source familiar with his thinking, Turzai would lean more toward the open Senate seat than a second run for the governor’s mansion.

He ran unsuccessfully for governor in 2018, but sounded skeptical of returning to politics after resigning from office in June.

One last name as of now has escaped widespread media attention as a Republican statewide candidate — state Sen. Doug Mastriano, of Franklin County.

A former Army colonel who won a 2019 special election, Mastriano has become a vocal and public face of the reopen movement during the COVID-19 pandemic.

Wearing a cavalry hat and spurs, he can often be found wielding a selfie stick, recording himself in Facebook Live videos viewed by thousands of supporters.

His love of social media has also led to controversy. During his 2019 run, Mastriano shared conspiratorial, anti-Muslim memes on his campaign Facebook. In office, he attacked local faith leaders who criticized his opposition to masks in a since deleted video, according to the York Dispatch.

One GOP operative said that Mastriano could wrap up “100 percent” of President Donald Trump’s base in a gubernatorial run, providing a large enthusiasm advantage.

Another consultant responded to the idea of a Mastriano run with: “Seriously?”

Addressing the question in August, Mastriano said his sights were solely on his re-election to the state Senate this year.

“There’s a lot of love out there, and I’m honored,” Mastriano told the Capital-Star. “But it’s premature to be considering something like that right now.”

In a July interview in his Capitol office with two supporters of QAnon — a false far-right conspiracy theory that claims Democrats and global elites engage in child sex trafficking — Mastriano laid out three conditions for a run: “God’s calling, the people … compel us to go forth, and we have the resources.”

At least two Facebook groups with almost 15,000 members are showing some early grassroots interest, calling for Mastriano to run for Pennsylvania’s chief executive in 2022.