Oh, Tomorrowland. Like the future, I wanted you to be good. Who doesn't enjoy a fanciful journey into times unknown, and director Brad Bird has delivered some excellent, smart-fun family sci-fi adventures before (The Iron Giant, The Incredibles). But Tomorrowland, an original story co-penned by Bird and Damon Lindelof (Lost), is a bust.

It begins in the past, at the 1964 World's Fair, where a judge at the Hall of Invention is dismissing a boy's not-quite-functional jetpack. Then, poof! The young inventor is spirited away to the future (I think), where everything is silvery and gleaming and, yes, there are jetpacks.

Meanwhile in the now, the space-shuttle launch pad is being dismantled, because NO FUTURE. A plucky young woman named Casey (Britt Robertson), who dreams of visiting the stars, is addressing this lack of opportunity by sabotaging the work site. When she gets caught, it's no SuperMax for her, but rather a magical trip to that same silvery city, where, of course, she is invited onto a rocket ship because FUTURE. 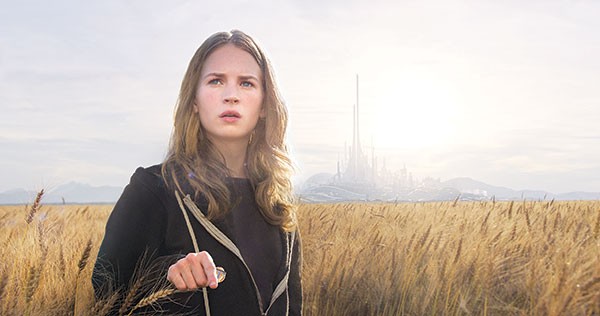 Field of dreams: Britt Robertson looks for the future.

The visit expires, and Casey is back in Florida, condemned to a series of frantic, unfunny and confusing adventures engineered so that she might: meet a weird girl from the future (Raffey Cassidy); dodge some robots; and join up with America's only other dreamer, the jetpack kid from the World's Fair, now a cranky, paranoid man (George Clooney).

If only Tomorrowland were entertaining: It's too silly for adults and too complicated for little kids; the pacing is a mess; and some scenes feel grafted from other movies (Men in Black cutting-room floor; the never-produced Edison and Tesla's Steampunk Nights in Paris). The dialogue is preachy, and the actors mostly squabble. (Even Clooney — Clooney! — is grating.)

But for a film about dreaming up a better future, it fails to entrance or inspire, chiefly because it doesn't trust its audience to discover and assemble its pieces. There isn't much nuance in Tomorrowland: The Mighty Hammer of Obvious Themes is wielded so often you may choose to root for the bad guy and his shitty future out of spite. Stop yelling at me to care and dream and invent things!

There's a rich irony that all this dare-to-be-a-creative-outlier blather is being shoveled out by Disney, a global entertainment mega-entity that exists to wring money out of us by reproducing endless amounts of formulaic product. And I hope you see the same Disney ad I saw before this film: the one where the two suburban dads are mocked for dreaming and daring to build a backyard rocket — before being course-corrected and whisked away to a Disney theme resort to hang out with a guy in a Buzz Lightyear costume. Because BUY SOMETHING.