"I've set myself so far behind, there's thousands of years ahead." 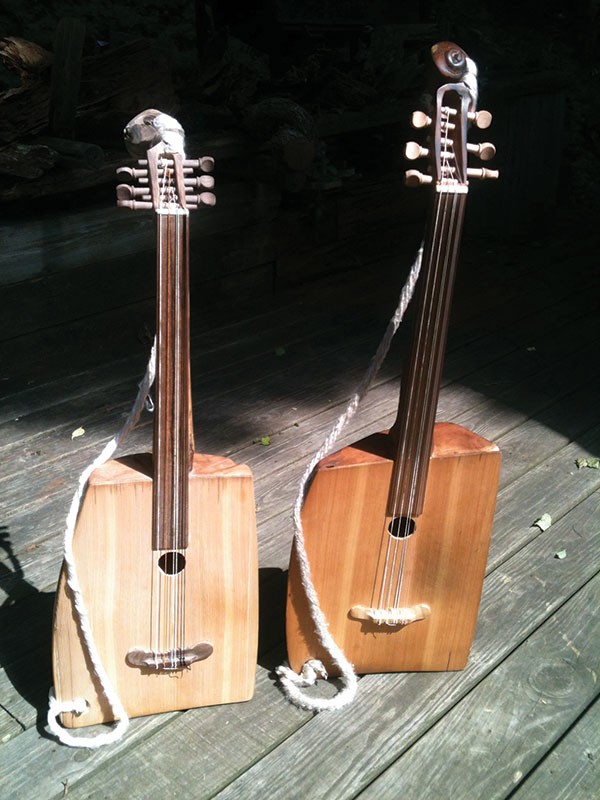 Before you can understand why Tom Coleman makes stringed instruments from driftwood and bone, and rebuilds old guitars for traveling buskers to play amid rubble along the Monongahela River, at a spot dubbed the Temple of the Dog, you have to understand his philosophy:

If you're going to do something right, you might as well reinvent the last 10,000 years of the craft.

Tom Coleman is, first, a carpenter. Philosopher seems to be a close second. The carpenter's house in Carrick still has a large hole in the living-room ceiling from when he bought it more than a year ago, but the philosopher has filled this room with lutes, mandolins and ouds (a pear-shaped stringed instrument).

Coleman, a lanky 49, is animated by his quest to reiterate several millennia worth of musical achievement, rarely pausing to sit. He discovered this passion when he spent years helping to turn St. Michael's Catholic Church on Pius Street into condos. "In working on things like a bell tower and the body of a church, I got to understand the church itself is an instrument," resonating with its organ. In an earlier age, he says, "I think out of the scraps of architecture, people made musical instruments."

Rockabilly Hall of Famer Chuck Owston, who long ago took up world music, has known Coleman for a decade. When Coleman had his apartment above the Beehive on the South Side, about seven years ago, Owston recalls, "he had made a resonator of a guitar out of a Charles Chips can. It was fascinating. It sounded like one of those National steel guitars or something that Son House played." It also had a deer antler for the bridge. "He had made another one and he gave it to me. He said, ‘This one is more blues-oriented, because it's made from barbecue chips.'"

That's about the time Coleman began playing street music, learning to repair instruments and making busker friends. But buskers who congregate attract attention from the police, so he helped fix up the Temple of the Dog, a secluded spot across the railroad tracks from the South Side Flats and into the trees on the Mon's floodplain. He paved it with scrap bricks and has collected several years of performance recordings from the site.

He shows one of the instruments he rebuilt, an 11-stringed oud, in whose face he inlaid bone and shell from the Temple and his yard, and mandalas cut from scrap building material.

For his original instruments — every temple needs its sacred instruments — he began last April to use found, natural materials, save for the strings. He reconceived by experiment what multiple world cultures have taken thousands of years to perfect: the acoustic stringed instrument.

Coleman lets their wooden origins — from the water or defunct trees — define their personalities. "The wood is so beautiful that washes up from the river," he says. "When you cut into it, it is like flesh."

The body of his first creation, Log, is a bulbous, asymmetrical rectangle. It has four fretless notes, two with doubled strings like a tamburitza, the small sound hole of a balalaika, the headgear of an oud and the tuning of a cello. So of course it sounds like a sitar. Near the string-tightening pegs is a bone from the Temple, while the face is scrap from St. Michael's bell tower.

Bride of Log is a little heavier, with a narrower neck, and sounds more like a guitar. Chuck Owston has used the third instrument, Son of Log, to play a ZZ Top song at Club Café, and is now recording a CD with it. It has a beautiful headstock at the top of the neck — a scroll a la violins and cellos. Fourth is Plank, a flattish rectangle from the Mon. It has seven neck strings, plus 14 more on the body that resonate sympathetically.

Coleman brought out his fifth instrument, still in the scrap stage, but already a beautiful, pear-shaped bowl with driftwood's whirls and striations. Now called Cello Log, it has the sleek lines of a futuristic sports car in front and an eerie but entirely musical sound palate. "It's the last one of this series," he says. "After the fifth one, I'm going to start using fire."

And so Coleman has reached the Cro-Magnon stage: Instrument-makers use heat to create steam to bend lighter woods into more resonant shapes.

"I've set myself so far behind with these design strictures," he enthuses. "There's thousands of years ahead."