"It made sense for me to draw upon the topics of the coal-mining industry in my home state." 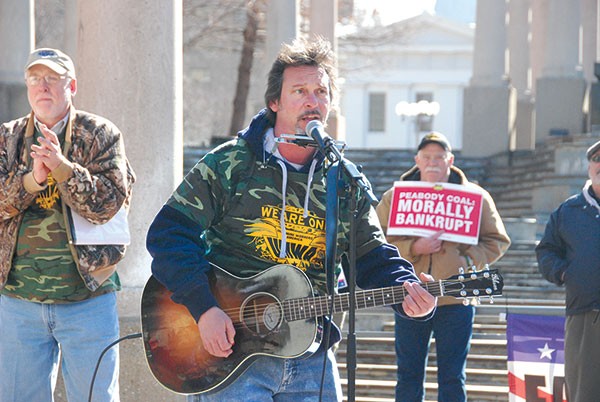 Tom Breiding grew up in Wheeling, W.Va., in a state long associated with coal mining — but his involvement with the United Mine Workers union came through music.

"It began with the Unbroken Circle record; I think I put that out in 2008," Breiding explains. "I always wanted to do a bluegrass record, so it made sense for me to draw upon the topics of the coal-mining industry in my home state. Through that record, I made some contacts with United Mine Workers and played a few events with them."

Since then, the longtime Pittsburgh-based singer-songwriter become something of a union troubadour, traveling to rallies and specifically taking up the cause called Fairness at Patriot. The UMW has been campaigning against Patriot Coal Corporation, which was formed 2007 through a spinoff from the larger corporation Peabody Energy. (Another coal-company spinoff, Magnum, which was created by Arch Coal, later merged into Patriot.) Patriot declared bankruptcy in 2012 and has made efforts to relieve itself of pension duties for thousands of retirees who had been ensured benefits by Peabody and Arch; Peabody and Arch remain viable businesses.

"It's a sad thing, I think, when a company goes bankrupt and people lose their pensions," Breiding says. "But when you have a company that's still making money — 18,000 of [the affected retirees] never worked one day for Patriot. That's a scheme that I think is really terrible."

The UMW is campaigning to reinstate the retirees' pensions with Peabody and Arch, arguing that Patriot was created specifically to go into bankruptcy and take away the larger companies' pension responsibilities.

Breiding wrote songs — first a tune called "River, Rails or Road," then two more called "Peabody Lied" and "Not One Damned Day" — which he meant as UMW anthems; UMW communications director Phil Smith took him up on them, and has made "River, Rails or Road" part of the Fairness at Patriot campaign.

This Fri., Oct. 4, Breiding plays a free show at Moondog's in Blawnox, designed to bring attention to the Fairness at Patriot campaign. He's joined by labor songwriter Mike Stout and Bill Toms.