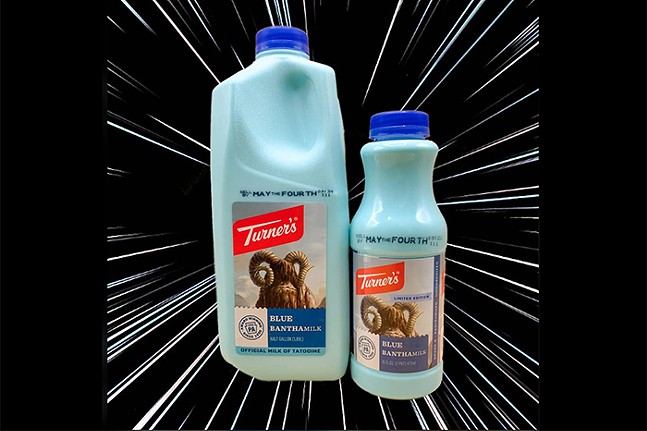 Image courtesy of Turner Dairy Farms
Blue Bantha Milk
May the Fourth Be With You, so better drink a bunch of blue, birthday-cake flavored milk.

Two weeks ago, local dairy Turney Dairy Farms released a limited edition Blue Bantha Milk in homage to the Star Wars films. In the original 1977 film, Luke Skywalker is served some blue milk made from a Bantha, a fictional creature in the Star Wars universe that look like a giant wooly sheep with horns.
The beverage is marketed at the “official milk of Tatooine” and also included changing the sell by date to read “May Fourth,” in honor of what has become the unofficial Star Wars Day, May 4. (Fans like to say “may the fourth be with you” in reference to “may the force be with you.”)

Today is May 4, so the Blue Bantha Milk will be leaving the shelves after today.

Some Western Pennsylvania Star Wars fans are reminding people this is the day to enjoy the blue milk.


Expiration date is today. So drink 'em if you got 'em #MayTheFourthBeWithYou pic.twitter.com/038NSZuoue

Turner recently celebrated its 90th anniversary and is known and beloved in the area for its iced teas and flavored milks. In addition to producing the classic chocolate and strawberry milks, the dairy also regularly sells limited other flavors like orange, cookies & cream, and chocolate peanut butter.

Some local fans are even going so far to stock up on as much Bantha Blue Milk as they can. That’s a lot of birthday-cake milk to drink before it expires. Use the force, Pittsburgh.