To join the latest social-media site from Dutch troupe PIPS:lab, you have to be dead | Theater | Pittsburgh | Pittsburgh City Paper

To join the latest social-media site from Dutch troupe PIPS:lab, you have to be dead

"I am active on Facebook," he concedes, "but it sometimes gives me a physical sickness." 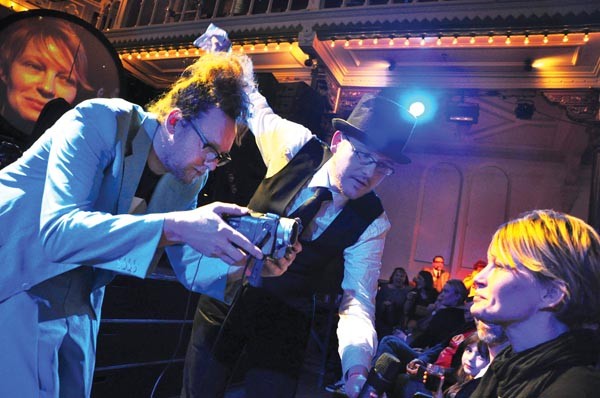 Like death itself, Diespace is impossible to understand unless you experience it firsthand. The idea, as described by media releases, is that Diespace is "the first active Internet community for the deceased," and the joke is that "you have to be dead to join."

For this to make any sense, you'll just have to see the U.S. premiere of Diespace, at the Pittsburgh Cultural Trust's Distinctively Dutch Festival. Like the rest of the festival, the work of PIPS:lab has nothing to do with dikes or wooden shoes, and everything to do with the avant-garde Netherlands arts scene. Diespace features video projections, trippy music, anarchic staging, wheels, helmets and audience participation that makes normal audience participation at avant-garde shows seem droll.

"We wanted to create an interaction with the whole audience at the same time," says Thijs de Wit, manager of PIPS:lab, via email. "Interaction always plays an important role in our work. The other idea was to make a performance about elderly people and new media." He adds: "A paradox."

"I am interested in the social aspects of the Internet," says PIPS:lab cofounder Keez Duyves. He recalls a friend who pursued a girl because she didn't list her own boyfriend as a "favorite" on MySpace. "I am active on Facebook," he concedes, "but it sometimes gives me a physical sickness."

PIPS:lab has been drawn to cerebral satire since its early days in Amsterdam's "underground party scene." (If you have ever seen Amsterdam's aboveground party scene, you may wonder what there is to hide.) Like other website communities, Diespace is frenetic and twitchy, shifting tones and media, leaving the audience both engaged and disoriented. As one outlet phrased it, PIPS:lab is "never a comfortable ride."

Curiously, Duyves and de Wit are skeptical that Diespace is actually "distinctively Dutch." "I think a performance like Diespace can only be made by people with an open mind," says de Wit. "Holland is a very liberal country, but I don't think it can only be recognized by appreciators of Dutch culture."

"What is Dutch culture?" asks Duyves. "The Dutch used to trade everything, and in that sense we try to sell a solution to death. The Dutch blend in. We come from different cultures, and we actively dissolve them into different shapes."