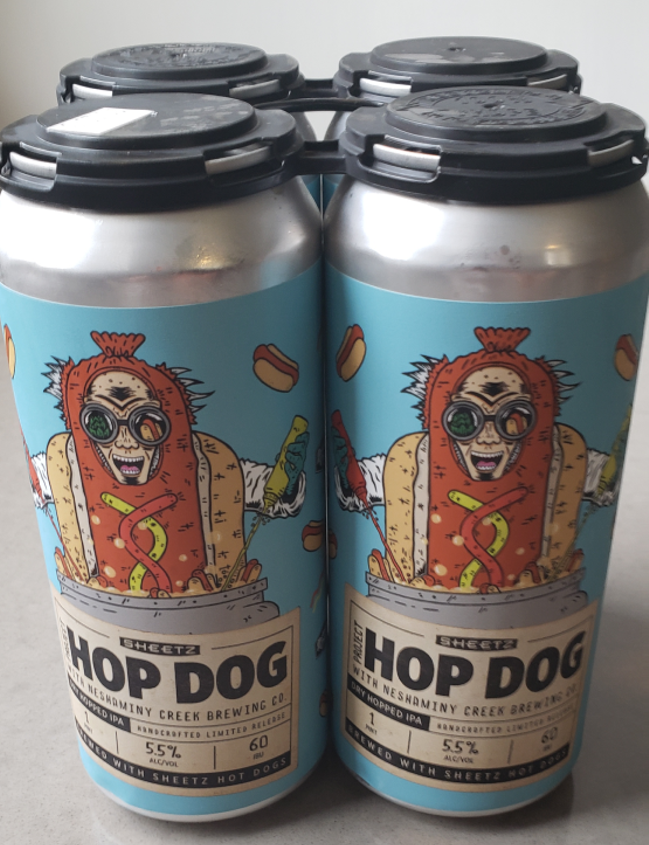 CP Photo: Josh Oswald
Gross.
I appreciate weird stuff. Friends, family, and coworkers know this. In some cases that works in my favor — like being selected as Pittsburgh City Paper's off-track betting beat reporter; and sometimes said characteristic turns me into a Jackass-like court jester, who turns out to be a willingly abused talk show sidekick. Today, was the latter.

"Project Hop Dog — yes a hot dog craft beer — is our craziest collaboration yet,” said Ryan Sheetz, AVP of Brand at Sheetz. “We hope our latest limited edition craft beer is a fun surprise for our customers, a surprise that’ll engender smiles, laughter and conversation — something we could all use more of right now," reads the Hop Dog press release.

My initial reaction to the Sheetz's Hop Dog beer was that the art on the can was good. Maybe the beer won't be so bad, as they obviously put some kind of effort into the packaging. After the first sip, the utter relief that the beer tasted nothing like hot dogs rushed over me in an awesome wave. So I hopped on Slack and declared that Hop Dog was "very good."

But as I continued to nurse the 16 ounces of whatever the hell this beer is (the can describes it as a 5.5% alcohol, dry hopped IPA with 60 IBU, which I can only guess means International Bun Units) reality crept upon me slowly, but pungently, like a Heinz ketchup pour.

Hop Dog is not good. It's initially refreshing like a quick pull off a hose after hours of playing in the summer heat. But then you realize it tastes like a very mediocre to below-average session IPA, much like the realization that your parents bought that hose that you're using to quench your thirst 20 years ago from Busy Beaver. There's a lot of flavor to it, but where is that flavor coming from? A hot dog?

CP Photo: Josh Oswald
My dog disapproving of what he has just witnessed.

In the spirit of this taste test, I did condiment chasers of ketchup, brown mustard, and relish, like any normal person would do when drinking a beer that is "brewed with Sheetz hot dogs."

(Yes, it really is brewed with hot dogs, though the press release does note that the addition of Sheetz Hot Dogz in the brew kettle is "just for fun.")

The brown mustard was a decent complement, cutting the extra bitter flavor of this asinine beverage. As for the relish, well, I'd rather just eat a bowl of relish than drink this beer ever again. Ketchup, which I love on fries and burgers, made me sad and kind of sick. It made the drink and my life taste like a Bloody Mary made by a 5-year-old. Is that too specific?

For a full list of participating locations, visit www.Sheetz.com/beerproject.