Time weaves its complex tapestry swiftly and satisfactorily, with nary a gap in color, theme or pace. 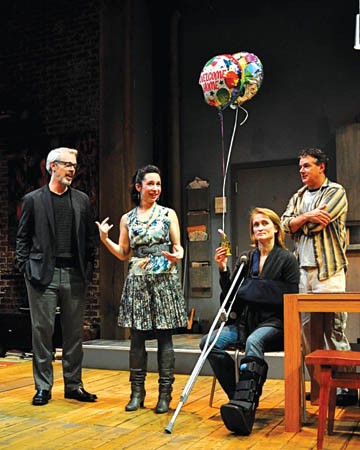 What timing: City Theatre opens a drama about war correspondents just as President Obama announces the end of the Iraq war. Hmmm. I think I'll give more credibility to the former than the latter.

Donald Margulies' 2009 Time Stands Still explores two core relationships as it discusses the role of war journalists, from gonzo ghoul to derring-do do-gooder to under-appreciated hero. In the central couple, he's a writer who realizes his war days are way past their sell-by date; she's a still-gung-ho photographer recovering from near-fatal injuries, both emotional and physical. Contrasting their complicated relationships -- with their vocations as well as with each other -- is the supporting couple in a May-December romance standing in for normality.

With City artistic director Tracy Brigden at the helm, Time weaves its complex tapestry swiftly and satisfactorily, with nary a gap in color, theme or pace. She starts with a tight-knit cast. Suitably WASP-ish, Angela Reed combines conscience, idealism and glamour as the conflicted photog. Andrew May stunningly portrays an array of emotions, notably masculine protectiveness and a vulnerability that is not in the least wimpy, while remaining a highly likable guy.

Opposite them, providing comic relief and the occasional cold splash of reality, are Tim McGeever and Robin Abramson. The former fills the thankless role of buddy-boss-former-lover with dignity. And the ever-charming Abramson stops just comfortably short of ditzy as his young girlfriend to reveal herself as a clear-eyed realist.

In many ways, Time Stands Still is a love story, with more truth than sentiment. Margulies' exploration of war and those who choose to witness and report it will remain timely for some time, I'm sure. While the Iraq war may be over (we can hope), there's no shortage of war for future stories and storytellers.