"Emotions are actually the last thing I want to come in contact with. Grids. I like grids." 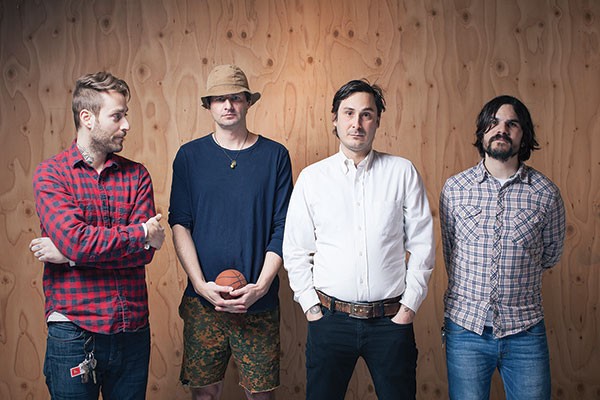 Who's getting emotional? Owls (Tim Kinsella, third from left)

It might come as a surprise after hearing Tim Kinsella pour out his emotions as the leader of his myriad projects — Cap'n Jazz, Joan of Arc and once again, after a 13-year hiatus, Owls — but the seemingly unhinged frontman likes to be cool and in control. As he approaches 40, he tends to indulge that instinct. Take, for example, the song titles on Two, Owls' latest offering. From the opening track, "Four Works of Art," to the closer, "A Drop of Blood," each title is simply the first word or phrase of the song. Rigid constraints like these lend an air of premeditation, of meticulous arrangement.

"I think of myself as [a] formalist in pretty much everything I create," Kinsella says. "I'm inspired by limitations. Maybe it's some kind of control issues I have. Before I go to bed, I make an hour-by-hour list of what I'm doing the next day and I get anxiety if I stray from that [routine]."

Lately, it's a regimen that seems to be serving Kinsella well, musically and otherwise. In April, his second novel was published, an event that can be felt on Two in the form of the vivid vignettes and evocative metaphors that pepper his lyrics. He's also recently taken the helm of Featherproof Books, an indie publishing house in Kinsella's base city of Chicago.

With so many plates spinning, it's easy to see why Kinsella would welcome routine. "It's ironic that we're champions of this emo thing when emotions are actually the last thing I want to come in contact with," he says. "Grids. I like grids."

Musically, Kinsella has been putting himself under the spotlight since 1989. It's hard to look at the rigor of Kinsella's current approach and not see it as fantasizing about a normal life. Rather than continuing as a visionary, Kinsella is, through Featherproof Books, making the transition to the role of facilitator of other creators' visions. That he is making that transition of his own free will exhibits a certain maturity.

"I don't need to see one more thing in the world with my name on it, but I'm very inspired and invested in realizing creative projects," he says. "This is just a way to invest the same energy, but help other people get their stuff in the world."

Kinsella seems to find this new phase of his creative life freeing, as he no longer feels tethered to the trappings that come with making the scene, like late nights at the bar. "It's much more natural for me to fall asleep at midnight and wake up at 7:30," he says, "than it is to force myself to stay awake for some idea of a good time."

Kinsella seems grateful for the opportunity to continue creating. Though he has a dedicated following, the rewards of his labor over the years have not been commensurate with his effort. "We've been stamped losers long ago," he says. In hinting that his days as a performer might be numbered, Kinsella is none too subtle. "There's something real tough about making yourself vulnerable," he says. Each time out, "It takes more and more resilience to muster the energy."