Playwright Rosenstock's desperation to be funny is what keeps the jokes from landing. 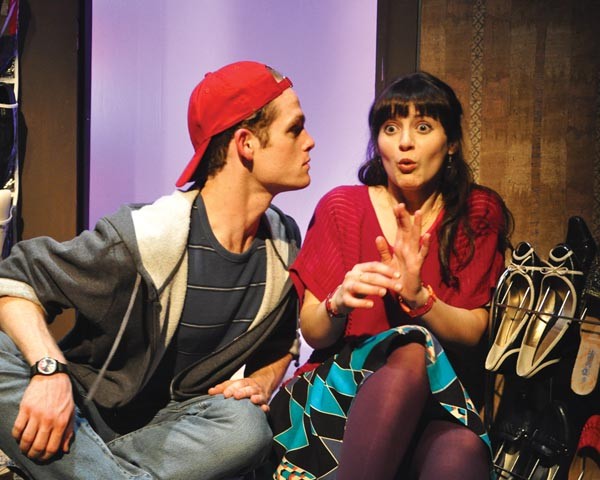 The perception of time is interesting. Tigers Be Still, a play by Karen Rosenstock at City Theatre, is about 100 minutes long. But when I stumbled out of the theater, I wouldn't have been surprised to learn that it was 3 o'clock. In the afternoon. Of the following week.

Two sisters, Sherry and Grace, are seriously depressed. Recent college grad Sherry can't land a job, and Grace's fiancé has been sleeping with another woman. Meanwhile, their mother lives in her bedroom, afraid to come out because she's gained weight. And the husband/father of the family has just walked out. (Who can blame him?)

And that's all backstory. When the show begins, Sherry has managed to land a job … and a tiger has just escaped from the zoo! (Don't worry about this part, because Rosenstock will bang her metaphorical drum over and over and over again.)

Sherry's new job puts her in the path of two other crazy people, and everyone carries on all over the stage for quite some time.

Rosenstock's first problem is that the first half of the play is fueled by a Christopher Durang/Craig Lucas-type outrageous-comedy style — improbable things happen and/or the characters react improbably. Just the sheer wackiness of it all is supposed to have you doubled over. But she just doesn't have the chops to pull it off.

Her second problem is even worse: The play eventually curdles into this nauseatingly sentimental cliché-fest. And all of the actors, and director Matt M. Morrow, have to suddenly turn their comedic caricatures into living, breathing characters.

Considering the small amount of help they get from Rosenstock, good luck to them. Her writing is thin and, in a way, immature throughout. Her desperation to be funny is what keeps the jokes from landing. And when she tries to write heartfelt emotions, it feels exactly like that —someone trying to write heartfelt. The scene where Sherry miraculously cures Grace's depression with all the insight of a bumper sticker is particularly painful to watch.

Theo Allyn's turn as Grace is funny enough, although she's going to burst something pushing the jokes that hard. Erika Cuenca, as Sherry, can certainly make winsome pluck seem appealing. But, like Allyn, she has to fill in what the writer's left out, and forces the stalwart optimism a little too heavily.

Noah Plomgren has been cursed with the nearly unplayable role of a sullen, scarred teen-ager more artificial than Astroturf. But hats off to him; he has a scene in a shoe closet of such unspeakable bathos that … well, a lesser actor would have just called in sick. And Jeff Howell manages to find some smaller moments and plays them effectively.

Morrow does what he can; there is a refreshing quirkiness to the production, and he's particularly effective at dramatically structuring the evening. But eventually he comes face-to-face with the writing and, unfortunately, Rosenstock wins.