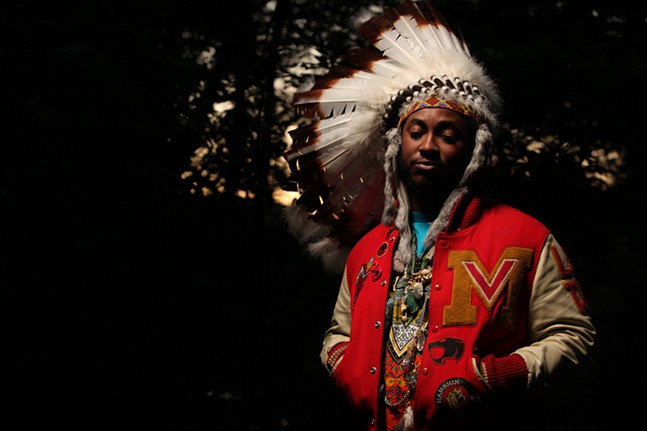 Photo: Motormouth Media
Thundercat
Before he had even reached the microphone, the crowd at Roxian Theatre in  McKees Rocks erupted. Thundercat emerged from backstage with his pink dreadlocks tucked under a dad hat, adorned in a Pittsburgh Pirates jersey with “MAC MILLER” in the name plate, the number 92 (Miller’s birth year) on the back of the jersey.

“Thanks,” Thundercat said when he got to the mic. He took a moment and soaked it in. “I really needed this.”

He began the notes to "Rabbot Ho," the opener to his 2017 album, Drunk. As it ended, he shouted to the crowd “Are y’all ready to go down a fucking rabbit hole?”

And thus began a night of what seemed a lot like catharsis, both for the attendees and the artist on stage.

Mac Miller, who passed in September 2018, was a frequent collaborator and close friend of Thundercat. The two worked together on numerous projects, including Miller’s final album, Swimming. Their personal relationship was strong, and Miller passed while Thundercat was on his way back to Los Angeles to see him.

Like many of the other artists who were close to Miller, including ScHoolboy Q and Vince Staples, Thundercat has found it difficult to speak about his friend's death publicly. The stage, and Thundercat’s debut in Miller’s hometown, gave him some opportunity.

“So many stories,” he said to the crowd. “So many I want to tell all of you. I mean, I guess I tell stories in the songs, but you know. There’s funny shit, too. What me and Mac did.”

He transitioned from that into his song "A Fan’s Mail (Tron Song Suite II)" from Drunk, where he sings morosely about wishing he had nine lives, and envying felines as a result.

Watching Thundercat play bass live feels much like watching LeBron James performing a chasedown block. Here’s this person right in front of you doing this thing that a human being shouldn’t be able to do, and yet there it is. His fingers glide effortlessly up and down an enormous six-string hollow body bass with four pickups, flicking strings at speeds that rival a piano player on amphetamines. Each song he performed normally included a 2-3 minute improvisational interlude, where he and the other two musicians accompanying him onstage made every jaw in the building drop. They alternated keys, switched time signatures, and adjusted to each other’s energies, all in real time, producing sounds that three-piece bands just aren’t supposed to be able to make.

And yet, despite the absurd skill on display, the moments in between made the music almost seem secondary.

The band dazzled for another half hour or so, and it was time to wrap up the show. Thundercat brought out friend and collaborator Zack Fox, comedian and former host of the now-defunct Vice Live. Fox, who was also a close friend of Miller’s, shared an intimate story with the audience about a dream he had a few days after Mac passed.

“We were partying, but we were all mourning Mac. We were partying hard, you know what I mean? Really sending him off. Somebody was like ‘ayo, Zack, we need more beer, can you go down to the basement and find a 30-pack of Budweiser.’ I go down and I pass this hallway and I’m looking, there’s a couch, and Mac Miller is sleeping right there on it. ... I walk over to him in the dream and I tapped him on his cheek, and he fucking wakes up. He’s coughing a little bit, drooling, like man what the fuck are you doing?

“I was like, uh, bro, you know everybody thinks you like passed away right? And he’s like, bruh that’s the dumbest shit I ever heard. Why would I die at my own party?”

“That shit rocked me bro,” Fox continued. “I’m not a spiritual dude. But it did something for me that night, and it let me know that no matter what happened, Malcolm touched every single one of us.”

Fox asked the crowd to lift their lights up and to make so much noise that “wherever Mac Miller is taking a nap right now” he would hear all of us. Thundercat began to launch into the funky, eminently danceable "Them Changes."

“Mac told me this is his favorite song,” Thundercat said as the song began.