What else is there to do on Wednesday night but create great music and drink with your best friends? 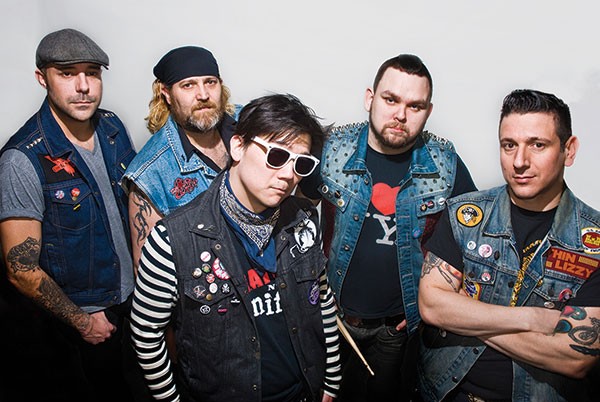 Punk rock is alive and well, living in Pittsburgh ... and named after a vest designed to keep animals calm.

Since July 2012, Thunder Vest has been playing, writing and drinking together; now, the band's self-titled debutis set to bring its message to the masses. Recorded with Eric Wrecker of The Cheats at the Red Room, the 11-track CD is bursting with energetic, catchy punk songs. Stand-out tracks include "Cigarette Girl," "Rad Girls" and "It's All About Me"; according to vocalist Scott Terzolino, the band writes songs "about girls, drinking and karate, and about girls drinking while doing karate."

Thunder Vest is five seasoned musicians, brought together by their friendship and love of all things punk rock. Terzolino (lead vocals), Phil Irvin (bass, vocals), Steve Chiang (lead guitar, vocals) and Donovan Greenaway (rhythm guitar, vocals) have all been in various successful bands over the years, as has the youngest member, drummer Kevin Eaton. Trash Magnet, Atomic Drops, Torn Apart Hearts, The Slabowskis and The Traditionals are just a few names that grace their musical résumés.

Like the members of most bands, they hate to choose a defining label, but Terzolino explains that Thunder Vest is on "the punk side of rock 'n' roll." Greenaway breaks in: "Punk rock is a state of mind." Thunder Vest's album and live shows prove that it is definitely the state of this band's mind.

At a Thunder Vest show, the loud, pulsating sound of the band takes over the room. Eaton and his drum kit are obscured by the rest of the band members standing before him in an ever-changing, moving line of instruments. Each member is clad in a vest of some sort, adorned, in the classic punk style, with pins of their favorite bands. Terzolino sings, bellows and gyrates all over the stage as each lyric belted out is met with back-up vocals from the front line. The crowd pushes forward, screaming and singing along.

The band looks forward to writing music, hanging out with friends and getting any kind of reaction from the crowd. "We do it for the social aspect," Chiang says. Besides, what else is there to do on Wednesday — practice night — but create great music and drink with your best friends?

Thunder Vest has deep roots in the city's music scene, and the members collectively believe Pittsburgh is thriving and bursting with talented bands of every genre. "All the bands I like are dudes like us," Terzolino says — then they all talk at once, giving shout-outs to members of The Cheats, Octane Saints, Dirty Charms and others. Clearly they are true lovers of the local music scene.

Most bands have a plan to get signed and become famous, but Thunder Vest doesn't subscribe to that agenda. All band members have careers — architects, insurance adjusters, etc. — and they have no delusions about breaking out of the city. Though they don't feel that the odds are stacked against them, Irvin sums it up: "Want a record deal? Get the fuck out of Pittsburgh."

It's evident that this ensemble of friends is living their version of the American Dream: family, friends and punk rock.