The problem with Greek tragedy is that all the "good stuff" happens offstage. 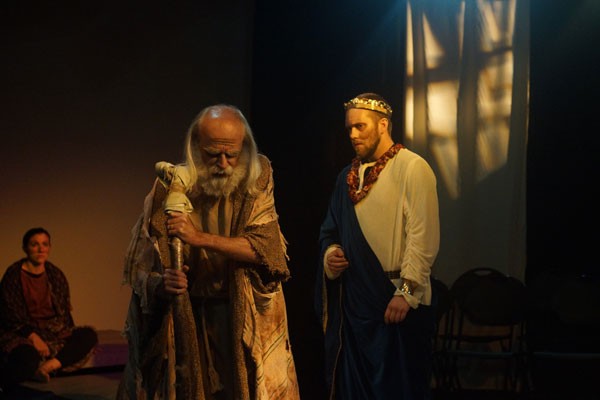 One thing can be said for Throughline Theatre Company's production of Oedipus Rex: It sure is LOUD!

Did director Liam Macik instruct his actors to re-create the oratorical style of classic Greek theater? Or are these poor cast members simply trying to make themselves heard over the production's high-volume soundscape? Either way, it's LOUD!

Sophocles' most famous work about the King of Thebes (translated here by Dudley Fitts and Robert Fitzgerald) tells the simple tale of boy gets parents, boy loses parents, boy gets new parents, boy kills biological father and marries biological mother. Yeah, that one. It seems an odd choice for summer-theater fare.

The problem with Greek tragedy (and we have Aristotle to thank for this) is that all the "good stuff" happens offstage or — worse — before the play begins. And the audience hears about it only secondhand.

Meanwhile, not only is the volume knob in Oedipus Rex turned to full, so is the emotional one: It starts high and stays there. After 90 minutes, it's too exhausting.

Joseph Ryan Yow looks quite kingly as Oedipus, but this production makes it difficult to feel emotionally connected to him.

Two cast members are stand-outs. As she floats about the set, Lauren Connolly epitomizes regal grace playing Queen Iocaste. Also quite good is Peter Fedyshin, who cuts a dashing figure as her brother Creon.

The hard-working chorus (every Greek tragedy has one) rarely leaves the stage. Choreographer Katie Trupiano keeps them from being static, but one wishes they were a little more synchronized vocally.

The set, by Elliot Gardner, is beautifully simple. Not only does it fit perfectly in the space at the Grey Box Theatre, it perfectly fits the script. One thing director Macik has done well is move his cast of 13 seamlessly on this lovely playing space. The blocking of the production flows effortlessly.

To Throughline Theatre's credit, it doesn't make the easy choices. And — on Saturday night, at least — it managed to draw a decent-size crowd. Even for Greek tragedy.