“Karl had absolutely no attitude and no pretension. And that was rare.” 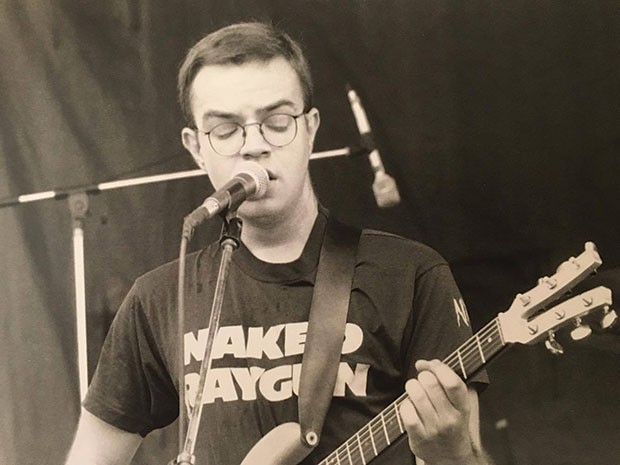 Photo courtesy of Rico Gagliano
Karl Hendricks at Lollapalooza ’93
Karl Hendricks was only 46 years old when he passed away on Jan. 21, after a three-year battle with oral cancer. But during his lifetime, he touched many people within the city and beyond, as a musician, record-store employee, author, teacher and family man.

The Karl Hendricks Trio became one of the most talked-about bands in the city’s burgeoning indie-rock scene in the early 1990s. The leader’s wall of power chords were balanced by lyrics that combined pathos and subtle humor, touching listeners with emotion and honesty. KH3 gained recognition nationally through tours and releases on labels like the national indies Merge Records and Comedy Minus One.

But in addition to making music, Hendricks spent most days selling and talking up other people’s music. He took a job at Bloomfield’s Jim’s Records in 1989 — two bus rides away from his childhood home in Port Vue — while attending the University of Pittsburgh; he essentially stayed there for 27 years. It changed to Paul’s CDs in 1993, and in 2012, Hendricks took a leap of faith and bought the business from Paul Olszewski, rechristening it Sound Cat Records. Last summer, health issues caused him to step down, though the location continues on as Juke Records. Along the way, Hendricks also received an M.F.A. in English, became an adjunct professor at the University of Pittsburgh, and began writing short stories that mined the same incisive writing skills he displayed in his songs.

It’s probably safe to say that everyone who came in contact with the understated but assured Hendricks has their own anecdotes about him. (Full disclosure: I briefly played drums in a duo with him and appeared on his second cassette, Where the Dogs Run Free.) Corey Layman, who played bass in the Trio from 2004 through the final album, The Adult Section (2012), was a college freshman when he met Hendricks at Paul’s CDs.

“He was so down-to-earth and personable,” Layman says. “He would be willing to talk to a young kid like me who wasn’t from a big city, and was still trying to find and discover music. Karl had absolutely no attitude and no pretension. And that was rare.”

For the past 10 years, drummer Jake Leger played in the Trio, following in the footsteps of his brother, Noah. Hendricks, he says, “had that Pittsburgh work ethic put to music: not taking yourself overly seriously, putting your head down, having a great creative output. You usually see that in working-class culture, but I think he defined that. He was very no-nonsense, but also his creativity was undeniably there.”

His bandmates repeatedly mention how Hendricks always knew exactly how he wanted his music to sound, coming to practice with papers mapping out song structures. Local artist and Pittsburgh City Paper contributor Wayno provided cover art for Hendricks’ releases since the guitarist was in the pre-Trio band, Sludgehammer. Even back as far as 1990, the focus was there. “We’d meet and he’d have detailed notes. Sometimes he would draw a little sketch with thumbnails and stick figures,” says Wayno. “He had a really clear vision of everything, and he trusted me to do it. It was great. He was really organized and professional even as a young guy.”

Wayno’s illustrations became synonymous with the music, offering subtle humor to temper the realistic, literate tales of heartbreak. The unnamed cat (seen on this week’s CP cover illustrated by Wayno) appeared regularly. “I’m still trying to decide if the cat was a mascot, a fourth member of the trio, or a Karl surrogate,” Wayno says, adding that the artwork, “wasn’t what might be an obvious reinforcement of the lyric content. He used it for comic relief. Maybe [he was] letting listeners know, ‘Yeah, [this is how I feel], but I’m alright.’”

Rico Gagliano — a one-time writer for the former InPittsburgh Newsweekly, who now co-hosts the radio show The Dinner Party Download — recalls the impact the band had on an audience at the CMJ Music Marathon in 1993. In his notes from the show, he scrawled, “Re: KH girl sobbing behind me. ‘I love him but he makes me so sad.’” “It’s true,” he says on the phone from Los Angeles, “a girl was actually crying behind me.”

Something else impressed Gagliano that night. “When Karl started playing [the song] ‘Baseball Cards,’ somebody in the audience that wasn’t even from New York threw baseball cards onto the stage. It was like the indie-rock version of The Beatles being pelted with jelly beans. I was just amazed by that.”

Following that show, which came a few months after KH3 played the Second Stage at Pittsburgh’s Lollapalooza, Hendricks seemed destined to break out on a larger scale. But other things were factoring into the equation. He and wife Megan had a daughter, Maeve, in 1995, followed by second daughter, Nell, a few years later.

Dan Allen, a close friend who organized a benefit in 2014 to raise funds for Hendricks’ medical bills, had many passionate conversations about music with Hendricks. But Hendricks’ life with his daughters affected Allen in a whole new way. “I’ve really looked at what he and Megan did as they transitioned to becoming parents, when I was transitioning to becoming a parent. It wasn’t in the front of my head ever, but in thinking about him and him being gone, that really came out very strong — watching them raise their daughters. If I had one more chance to see him, that’s what I’d tell him.”

Thanks, Karl. We miss you.