Three years in the making, Jordan Montgomery's Thank You 4 Ur Purchase But We R Not For $ale may be more relevant than ever | Music | Pittsburgh | Pittsburgh City Paper

CP Photo: Jared Wickerham
Jordan Montgomery poses for a portrait in East Liberty.
Jordan Montgomery got the idea for his latest album three years ago. He noticed how America’s Black culture — the music, the entertainment, the dance — is embraced by so many, but the same affection isn’t often applied directly to the people creating that culture. Thank You 4 Ur Purchase But We R Not For $ale, Montgomery’s third solo album, explores these prescient issues and comes out at a time when the country may finally be starting to think about how much those Black lives matter.

“This past year I really sat down, and felt I had enough resources and things around it to put it into motion,” says Montgomery, the Pittsburgh rapper and founder of Driving While Black Records (DWB). “The album and the title play off the theme of the album, which is really about how Black culture is often bought into, fetishized, but a lot of times you don’t really see people giving the same care and attention to the people within the culture. We still say things like ‘Black Lives Matter’ in a time where hip hop is the biggest music genre in the world … but people of color are still fighting against injustice.”

Black Lives Matter has been a current running through both of Montgomery’s previous releases, Dark Horse and Support Black Business, but what makes Thank You 4 Ur Purchase different is the time, thought, and care that Montgomery put into his newest album, which dropped on June 30.

“I tried to push myself with writing to tackle different issues from different perspectives,” says Montgomery.

“Paper Trails,” the album’s eighth track, was written from the perspective of a dollar bill, and discusses how money is used in so many different ways, both legally and illegally, in the Black community.

“Favorite Rappers,” the track Montgomery chose to release as Thank You 4 Ur Purchase's first single, is a message to up-and-coming rappers warning about problems in the industry. Montgomery says the pressure the music industry applied to hip-hop artists to uphold a certain persona can have severe consequences for creatives, citing the real-life incarcerations of Bobby Shmurda and Tekashi 6ix9ine.

“A record label may support a certain image of an artist, but then when they get into trouble [for upholding that ‘gangster rapper’ persona] and needs legal assistance and things like that, often you see them back away,” says Montgomery.

The fifth track on the album, “Angels” opens with the voice of Pittsburgh’s Tresa Murphy-Green, who DJs under the moniker Deejay Aesthetics. Montgomery took audio clips of Murphy-Green from a Protect Black Women march last year, as she read the names of Black women who have been killed in Pittsburgh.

“What they were standing for in that march spoke to what I was trying to get across in the song,” says Montgomery about the track, which shows how Black bodies are often misused. “I sat with her and a few other people to make sure I was coming from the right perspective and that the message was coming through pretty clear.” 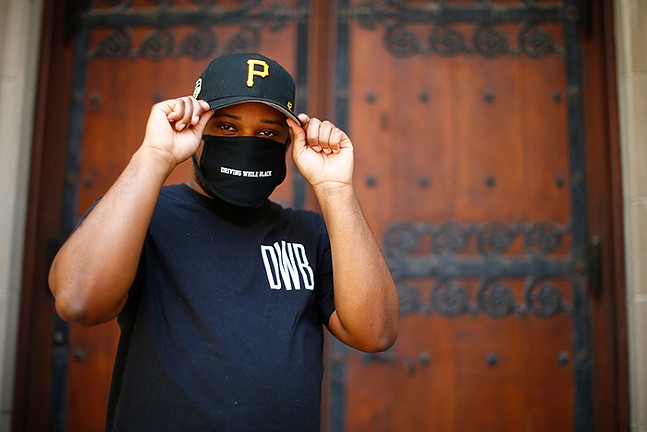 CP Photo: Jared Wickerham
While the idea for Dark Horse and Support Black Business came after Thank You 4 Ur Purchase, Montgomery feels releasing those projects first helped him become freer in his writing process. For Dark Horse, he worked with DWB labelmate and long-time friend, livefromthecity.

“He [sent] me a pack of beats and I was able to write on all of them. … It was very organic,” says Montgomery. “I wrote it pretty quickly, not that there wasn’t thought and appreciation put into it, but it was more of a fun project for me.”

Support Black Business, a DWB compilation album, was similar to his most recent release because Montgomery was able to be in a room with other creatives and collaborate, making the process more leisure-like.

“I’m usually just more so at my house just writing by myself,” says Montgomery. “I think it helped me explore different styles and play around with my flow and things a little more ... It was created while we were working on Thank You 4 Ur Purchase."

Since Montgomery put so much prep work into Thank You 4 Ur Purchase, the entire album was mostly recorded in just one studio session last September. His plan was to add two more songs to the project this spring, but then the coronavirus pandemic hit, and he took it as a sign to leave the album as it was.

“The album really speaks to what is going on right now,” says Montgomery. “A lot of it is timing. Sometimes you create something and maybe months or years go by, but it may hit a certain way when it finally releases based on what is going on in the world. ... It just goes to show how these issues never really go away. I started working on this album years ago, and we’re still talking about a lot of the same issues.”