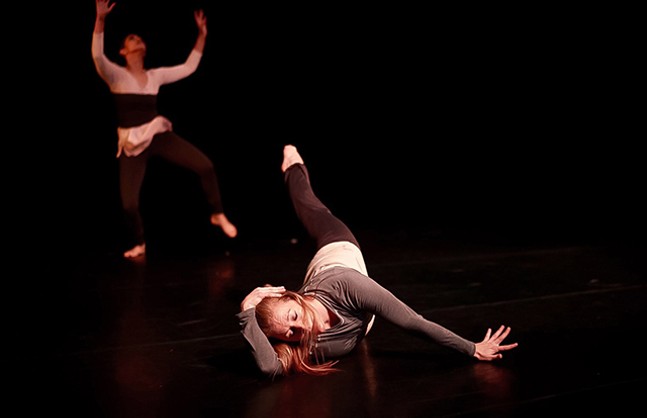 While strides have been made in recent years to address the lack of leadership roles and choreographic opportunities for women in dance, much still needs to be done. To that end, choreographers Heather Bryce (Bryce Dance Company, NYC), Erin Carlisle Norton (The Moving Architects, NJ/NYC), and Pittsburgh’s Shana Simmons (Shana Simmons Dance) have joined forces for Elevate, a triple-bill highlighting the many challenges the trio face as female dance makers.

After shows in Boston and New York City, Elevate will be close out in Pittsburgh with all three choreographer/artistic directors’ dance companies on Sat., May 4 for two shows at Point Park University’s George Rowland White Performance Studio.

The collaboration of like-minded choreographers came about through the mutual connection of Carlisle Norton, a Beaver Falls-native, with Simmons and Bryce. “All three of us have been in the field a while and I got a sense that all of us wanted to keep pushing ourselves with new projects,” says Carlisle Norton. “In our field, men dominate many of the leadership roles even though the field is mostly comprised of women. It was important to us to keep pushing forward for more leadership roles for women.”

The first half of the two-hour show is comprised of excerpts from each of the three choreographers/company’s repertoire, beginning with Shana Simmons Dance in Simmons’ “Grounded in the Soil” (2015) danced to music by Otis Redding.

“It is my interpretation of how Redding’s music makes me feel," says Simmons.

Next, Bryce Dance Company performs an excerpt from its “Moving Memory” (2018) set to original music by Spencer Snyder. The multimedia group work was inspired by her work with individuals with dementia.

The Moving Architects presents an excerpt from Carlisle Norton’s “COUP” (2011). The work, set to an original electronic score by Ian Hatcher, looks at gender power dynamics and features an all-female cast. “It gets very aggressive at times, as these power structures are revealed,” says Carlisle Norton.

The second half of the program is the Pittsburgh premiere of the title work, Elevate. The three groups communicated long distance via Skype to work out the flow and develop the transitions between the three independently choreographed sections by each choreographer/company to create a unified piece on themes of female empowerment.

It opens with the introductory dance film, also titled “Elevate,” and created by Gwen Charles, that sets the tone for the whole piece. Bryce’s “Stasis,” set to original music by Ricky Petraglia and Eva Lawitts, is inspired by the boundaries she puts on herself and the idea of being in stasis.

Then, Carlisle Norton’s “Walled” utilizes a 10-foot long semi-transparent piece of fabric as a symbolic boundary a trio of female dancers manipulate, wrap themselves around, and push through.