This Three Sisters is a beautiful piece, but it's not fun 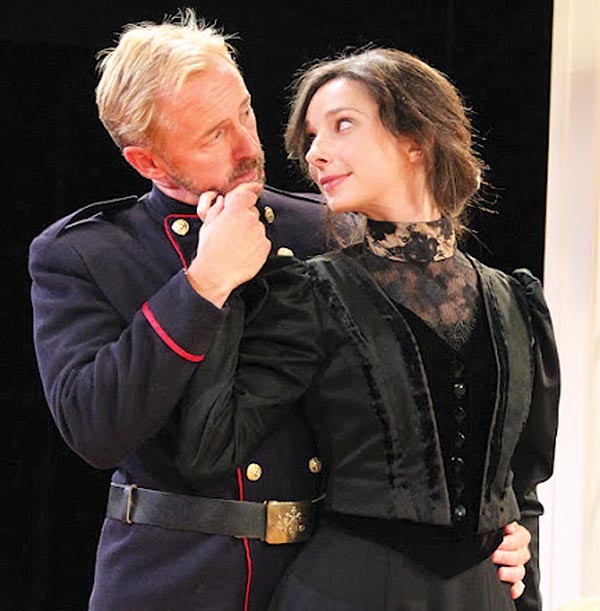 There is a scene, in the middle of Anton Chekhov's Three Sisters, in which Vershinin and Masha are alone. The way Pittsburgh Irish & Classical Theatre has staged it, this scene is the sexiest thing I've ever seen on stage. You wouldn't imagine corseted and uniformed Czarist Russians being erotic, especially when nary a boot is removed. But their cat-and-mouse game of seduction is physical, tantalizing and lusty. Oh, Allison McLemore and David Whalen are conspicuously attractive people, but director Harriet Power turns every word and gesture into a titillating double-entendre. It's like watching an Anaïs Nin journal come to life.

Otherwise, Three Sisters is Three Sisters, an epic family drama about bored bourgeois ladies stuck in the boonies. Olga, Masha and Irina want to return to Moscow, their childhood home, but they can't, so they kill time with a bunch of yokels. This translation, by Paul Schmidt, is the latest attempt to wrangle Russian into coherent English, which is kind of like translating Shakespeare into binary code. Schmidt's adaptation is good, even soulful, but it will never represent The Russian Soul.

That said, PICT offers the best cast available, a remarkable mix of locals and out-of-towners, and some scenes are as urgent and stirring as the Masha-Vershinin mating dance. Once you slog through the great gelatinous blob of exposition at the beginning, the real drama gets started: affairs, bitchy in-laws, gambling, alcoholism, helicopter parenting, you name it. The story is a soap opera soaked in Slavic fatalism. A century later, Chekhov might have called it Keeping Up With the Prozorovs.

As the titular siblings, Nike Doukas, Allison McLemore and Vera Varlamov not only look roughly like sisters but act like them, too. As Baron Tazenbach, Leo Marks plays an incandescent German optimist, full of smiles and soft-spoken enthusiasm. Marks is not only a joy to watch; he plays Tazenbach with zealous sincerity, which makes the play's final tragedy so complete. This Three Sisters is a beautiful piece, the way wilting flowers have their peculiar beauty, but it's not fun. Everything ends in weeping and broken dreams. If you're just dying to embrace the relentless cruelty of life, well, it doesn't get better than this.