The following films were available for preview. For a complete schedule and more information about the festival, see www.3rff.com.

GREGORY CREWDSON: BRIEF ENCOUNTERS. This documentary on art photographer Gregory Crewdson is director Ben Shapiro's first full-length film, and it reads as such. Those who know Crewdson's work, and those who are interested in the photographic arts, will find it worthwhile, but don't expect anything riveting. We follow Crewdson around while he works on an eight-year series of photos, each painstakingly staged like a movie; the artist's work is fascinating, but the documentary doesn't elevate it, and may even dull it some. On the bright side, the film is only 77 minutes, so it doesn't drag. 9:15 p.m. Fri., Nov. 9, and 3:15 p.m. Sat., Nov. 10. Melwood (Andy Mulkerin)

CLANDESTINE CHILDHOOD. Set in Argentina in the late 1970s, Benjamin Avila's coming-of-age tale is partly based on the director's own past. With his parents running a small, armed anti-government group, 12-year-old Juan is forced to live a double life as "Ernesto." (After an exile in Cuba, his alias is borrowed from Che, naturally.) Avila does a fine job depicting how a boy of such an age would be both thrilled and terrified to be immersed in the revolution, even as it complicates his "normal" life at school. Juan's lively uncle provides many of the film's humorous moments, but the reality of balancing an armed struggle and a secure home life — plus our historical hindsight — suggests this is a drama likely to end in sadness. (The director's mother is among Argentina's infamous "disappeared.") In Spanish, with subtitles. 9:30 p.m. Fri., Nov. 9, and 5:30 p.m. Sat., Nov. 10. Regent Square (Al Hoff)

TALES OF THE NIGHT. French animator Michel Ocelot gathers a half-dozen folktales from around the world, rendering them as shadow-plays with silhouette characters and luminously colored backgrounds. Adults may find the premise forced (two kids and an adult envision tales in an abandoned theater) and the tales a bit saccharine. But they, too, will devour Ocelot's visuals, in which the action is backlit by mandalas, pyramids or stained glass, depending on the milieu. Meanwhile, precocious kids may pick up a bit of history — though they might want something a bit edgier, and might even ask why there are no tales from Asia. 1:30 p.m. Sat., Nov. 10, and 5 p.m. Sun., Nov. 11. Melwood (Chris Potter) 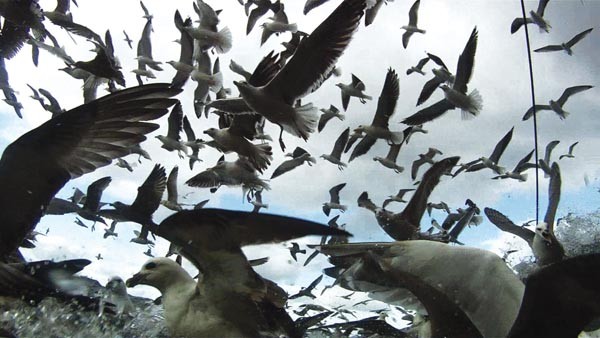 LEVIATHAN. At times, this film about commercial fishing by Véréna Paravel and Lucien Castaing-Taylor is haunting. There is no narrator, and dialogue is sparse. Instead, cameras — some attached to the fishermen themselves — go everywhere: from the bloodied side of a bait bin and the floor of the ship, to resting eye-to-eye with a fish head and traveling under water. If you're looking for a glossy documentary on commercial fishing, such as Deadliest Catch, this isn't your movie. But for an honest and captivating depiction of the industry, as well as its impact on man and nature, this is worth every one of its 87 minutes. 6:45 p.m. Sat., Nov. 10, and 9:15 p.m. Wed., Nov. 14. Regent Square (Lauren Daley)

NIGHT ACROSS THE STREET. Chilean filmmaker Raul Ruiz knew he was dying when he made this melancholy and occasionally playful meditation on life, death, dreams, poetry, art, the sea, marbles and the word "rhododendron." The non-narrative film recalls European arthouse films of the 1960s (think a less flashy, more introspective Fellini); the "story" jumps in and out of time, loosely connected by its main character, an elderly man preparing for his death. As he waits for death (literally, an assassin), he reflects on his childhood obsessions with Beethoven and Long John Silver, both of whom make appearances. For every scene that makes sense — the man's co-workers throw him a farewell party — another aspect remains enigmatic (his parting gift is a huge wooden head which he enthusiastically embraces). It was difficult for me to find any entry point into this highly personal film, but your experience may vary. In Spanish, with subtitles. 8 p.m. Tue., Nov. 13. Melwood (AH)