The 31st annual Three Rivers Film Festival, presented by Pittsburgh Filmmakers, runs from Fri., Nov. 2, through Nov. 17. The program of more than 50 films includes foreign-language works, independents, documentaries, shorts and local works. Of note this year are a sidebar of films by women directors; five coming-of-age films; a slate of Polish films; and four film events with live music.

Tickets for most films are $10 each (opening night is $15), and are available at the door or at www.showclix.com. All films screen at the Harris, Melwood and Regent Square Theater. For more information on tickets and the complete schedule, visit www.3rff.com.

The opening-night films on Fri., Nov. 2, include: Silver Linings Playbook (Regent Square), a dramedy from David O. Russell, starring Bradley Cooper and Jennifer Lawrence; and Rust and Bone (Harris), a romance between a Belgian man and an injured killer-whale trainer (Marion Cotillard). At Melwood, it's Beware of Mr. Baker, Jay Bulger's entertaining bio-doc about Ginger Baker, the greatest living (yes!) drummer. As always, the opening-night films will be followed by receptions.

The following films, screening during the first week, were available for preview: 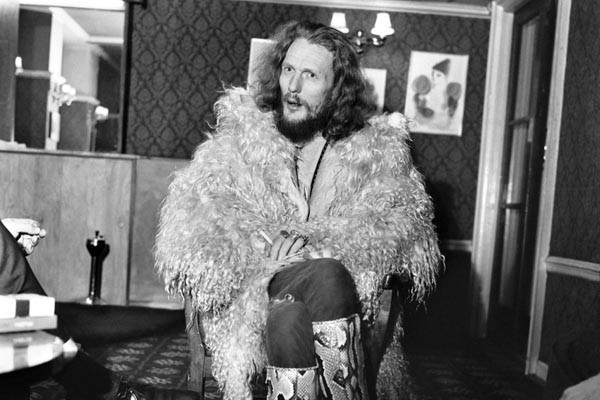 BEWARE OF MR. BAKER. It's a good sign that you're in for a wild ride when this documentary opens with its subject — legendary rock drummer Ginger Baker — smashing the director, Jay Bulger, in the face with his cane.

As we learn, Baker is prone to outbursts of bad or inexplicable behavior, even in his dotage, but fortunately, he's also an amusing raconteur. His interviews with Bulger — conducted at Baker's South African horse farm — form the narrative spine of this biographical doc. It begins with Baker's troubled youth and his early digressions into jazz and drugs (both lifelong love affairs), and continues through the formation and almost immediate dissolution of the massively influential rock band Cream and seemingly a dozen other mind-bending, short-lived rock bands.

In the early 1970s, Baker goes off the rails — and resurfaces in Nigeria, learning new rhythms from Fela Kuti. Another barrage of smashing things up and he turns up in Italy, then America, then South Africa, endlessly morphing from cheesy actor to polo player to free-jazz drummer.

Besides Baker's candid (and occasionally self-deluded) contributions, Bulger checks in with various estranged colleagues, including Cream's other two members (Eric Clapton and Jack Bruce), as well as estranged family members and still-adoring contemporary musicians. Bulger employs a great store of archival footage, from demented-looking 1960s British TV shows to Baker wandering the streets of Lagos in a dashiki.

You may have reckoned that the infamously self-destructive, drug-addled madman of the drums was long dead. Well, he ain't, and he's got the swinging cane to prove it. 7:30 p.m. Fri., Nov. 2. Melwood

COMPLIANCE. Craig Zobel's spare but ultimately searing drama is set on a busy weekend night at an Ohio fast-food restaurant. There, the harried manager Sandra (Ann Dowd) finds her already stressful night interrupted by a phone call from a local police officer. There's been a reported theft, the cop says, and Sandra needs to isolate, interrogate and search the suspect, a young worker named Becky (Dreama Walker). The policeman assures Sandra that he'll stay on the line and walk her through the official procedures.

Compliance, which unfolds in real time, depicts Becky's confinement and questioning, which quickly grows beyond the scope of any reasonable examination. Or, so it seems — and obviously so — to those of us watching. Yet Sandra, Becky and other individuals at the restaurant continue to take orders from "Officer Daniels."

Zobel's film, which is based on similar real-life hoaxes, is an examination of authority, and recalls Stanley Milgram's infamous experiment about administering electrical shocks under command. Few set-ups seem more perfect for such abuse of authority than the fast-food milieu, with its top-down orders, emphasis on conformity and young, often immature workers — and Zobel depicts its physical and moral banality brilliantly. Compliance will have you squirming in your seat. You'll likely be outraged that anybody could be as compliant as those depicted on screen, but Zobel builds an effective and disturbing case. 5 p.m. Sat., Nov. 3, and 9:30 p.m. Mon., Nov. 5. Melwood

TEDDY BEAR. Dennis (Kim Kold) is a 38-year-old body-builder who lives with his domineering mother in suburban Copenhagen. He's never had a relationship, and is painfully shy and lonely. After an older relative returns from a Thailand vacation with a new bride, Dennis travels there himself. But he's naïve about what constitutes meeting "adoring" young women in certain Thai bars, and grows even more depressed. He seeks solace in a gym, and as these things sometimes go, strikes up a friendship with the kind widow who runs the facility.

Mads Matthiesen's low-key film is a slow-build charmer, with much of its bittersweet pleasures borne on the massive shoulders of its soft-spoken lead actor. Kold, who is a real-life body-builder, effectively portrays Dennis as the aching man-child trapped inside a fearsome exterior. But Dennis is sweet and kind, and his late-in-life coming-of-age story is both heartbreaking and endearing. In English, and Danish, with subtitles. 7 p.m. Sat., Nov. 3, and 7 p.m. Wed., Nov. 7. Regent Square

LET MY PEOPLE GO! Ruben lives in an adorable Finnish village with his boyfriend, until a sack of money makes everything go wrong. Heartbroken, Ruben returns to Paris, where his family is gearing up to celebrate Passover. Turns out Ruben isn't the only one with troubles — his sister is getting a divorce, his father is having an affair, and elderly family friend and respected lawyer wants to play grab-ass. There are complications, misunderstandings and some lightweight examination of what it means to be gay, Jewish or gay and Jewish. Mikael Buch's film is a little silly and its main protagonist a trifle too melodramatic, but this romp is full of heart. In English, and French and Finnish, with subtitles. 2 p.m. Sun., Nov. 4, and 9 p.m. Tue., Nov. 6. Regent Square

The House I Live in.

THE HOUSE I LIVE IN. The term "war on drugs" was coined by Richard Nixon more than four decades ago, and Eugene Jarecki's searing documentary-slash-essay takes a clear-eyed look at the economic and social costs of this so-called war.

Jarecki weaves personal stories together with numbers and interviews with offenders, jailers, judges, cops, academics and families caught up in the ripple effects. Throughout the film, David Simon, a former police reporter who made his street-level study of the drug war the basis for his HBO series The Wire, offers an underscoring refrain about the systemic failure of the war.

In simple terms, a lot of money and effort is spent, without much decline in drug use or availability. Instead, cops and courts have processed hundreds of thousands of nonviolent drug offenders, and a sprawling prison-industrial complex has grown up to support it. And social and economic costs on a family and the surrounding community can be devastating.

Some of the historical information Jarecki presents is fascinating, such as how Nixon's original war focused on treatment and rehabilitation, and how each new drug is greeted with both hysteria and a media-driven association with a particular demographic (mostly racial). It's a worthy and fascinating film, though, sadly, not very hopeful. 7 p.m. Sun., Nov. 4, and 7 p.m. Thu., Nov. 8. Harris

THE MAKIOKA SISTERS. Kon Ichikawa's languid Japanese melodrama opens in the spring of 1938, where the four Makioka sisters are enjoying Osaka's cherry blossoms. Chief among the two eldest sisters' concerns is the single status of their two young sisters. Quiet, seemingly dutiful and traditional Yukiko is next in line to marry, but no suitable groom can be found. (Among the film's moments of sly humor is a dreadful date with a man whose chief interest is the habitat of a certain fish.)

Meanwhile, Taeko is a bit of rebel, eschewing the complicated kimono for Western clothing, and using her charms on two men, neither of whom is a good prospect by her family's standards.

Intertwined with these threads are larger issues, such as the changing role of women and men in the household, modernity nudging out traditions, and — though we know more than the characters do — the impending war.

Ichikawa frames the story over four seasons, beginning with the colorful, hopeful spring, and ending on a more melancholy and less-certain note amid the dreariness of late winter. It's a trifle soapy, but well acted, and the color photography is gorgeous. In Japanese, with subtitles. 7:30 p.m. Sun., Nov. 4. Regent Square